Dream of the Blue Turtles

I have now become Parker Posey in Best in Show. 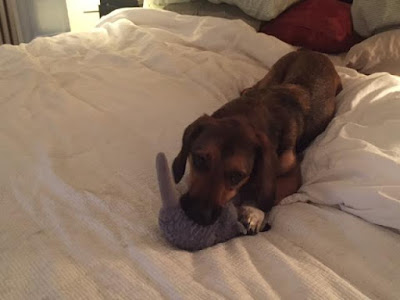 It's funny. He'll come with me while I change when I get home. Then he'll run downstairs and come right back up but with the armadillo.

A few weeks ago, the feet were chewed off. Kind of to be expected. Then he ripped a small hole in the belly.....and the inside fluff started coming out. With a little urging, I got 710 to perform abdominal surgery on Arnie.....which is what I call him. 710 put all the fuzz back in and sewed him up.  Good as used.

But I worry - like Parker - that we must have an identical back-up........for when surgery will no longer hold Arnie together again.

Problem is: our neighbor got him at TJ Mazxx or Marshalls. It's like the land of out-of-commission toys. The bargain bin.

Yesterday, I was at one of my other sites which happened to be between those two stores. Also in the vicinity were two pet stores, semi-frantically going to each one. None of them had "the" armadillo. Some of them had "an" armadillo, but not the one he'd love and cherish.

No armadillo.  No busy bee.

But now he's the proud owner of a big turtle. He just doesn't know it yet.

there is NOTHING we would not do for our furkids.