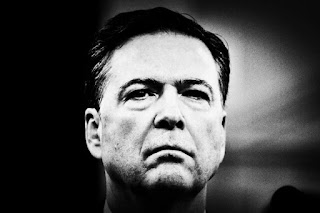 He was a dick amongst dicks.

A partisan player who fucked up more than he ever fixed.  .....and it came back to bite him in the ass. He got shit-canned.

Clearly, I'm no fan. And while I think he should have been gone last October, he served a purpose for the current administration...........until he didn't.

I do love how the media cited that the White House cited Comey's handling of the Clinton email "scandal".  And that's all they say:  "the handling" of it.

To many, I think one could surmise that Comey was wrong and fucked it up by his "October surprise". But I think the White House thinks he fucked up by not charging Hillary. What they meant was his 'mishandling' of the email scandal.

That is not the reason they 86'd him.

But it's easier to say 'lost confidence in' than 'trying to circumvent justice'.  The phrase "Conflict of Interest" seems to rise to the top of the explanations.

Perhaps there is a little issue with letting Comey go-go. I don't know the rules of engagement, but isn't he now free to talk.........or write a book?


What I found even more inneresting was that the Deputy Attorney General was the one to do the deed.  Jeff Sessions was nowhere to be seen. I have to believe that means something.

Song by: Dire Straits
Posted by Blobby at 12:03 AM

this entire regime is fucking guilty!

How convenient to fire the one in charge of investigating ones own scandal. Didn't A certain figure in a similar mess back in about 1973ish do this as well?

I picked the wrong week to give up sniffing glue!!