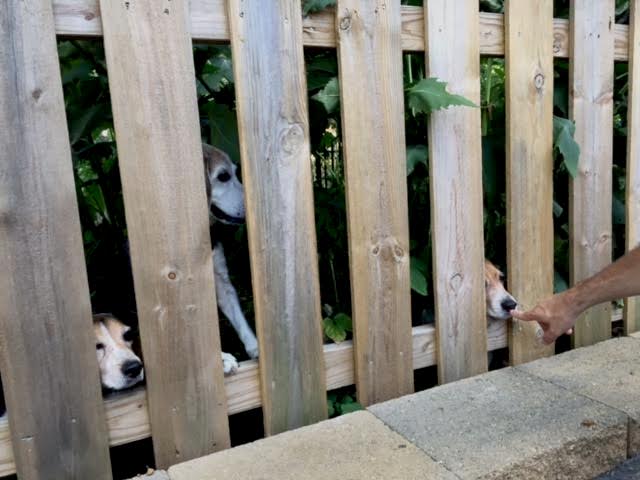 Fences keep us in or out. Or keep others out.

The fence that is my mind helps keep things in. I get to peer into memories I don't want to forget.


I've been thinking a lot about Petey lately. Two weeks ago he would have been 15.  A month or so ago was the first anniversary of him passing on. Now and then I see Shep do 'hound things' that is such Petey behaviour. Stuff he didn't exhibit at first........or I didn't see it.

And Petey got to know Skeeter and Logan, Georty's beagles. They were acquaintances. Seeing each other too infrequently to be 'friends'.

Skeeter made every trip to George and Morty's a welcoming time. I got cuddles, though not many kisses. He wasn't a kisser.....at least with me. But he liked to go in for the lean. And I liked it too.

The last time we were there was right after Petey's passing. And Skeeter did exactly what Morty said he wouldn't:  sleep with us.

Maybe he knew that we had a void and experienced a loss, but he left Logan, hopped up into bed between us and plopped his head down. No offense to Georty's wedding, but this totally made 710's visit.

I hope of the thousands of memories that Morty & George have of Skeeter, they'll keep them fenced in so they can peer at them from time to time and smile. I know how tough it is right now, but that little bugger will make them smile for years to come.
Posted by Blobby at 12:01 AM

condolences to george and morty; losing a furkid is hard. :(

This is so sweet. Thanks for the memory. I'm so glad you have fond ones of him also.