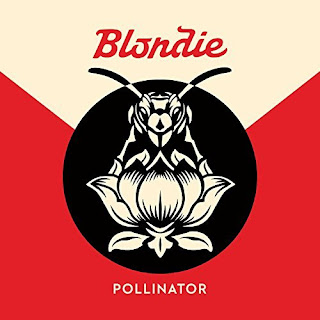 Blondie has released Pollinator earlier this month - their 11th studio album {I have 'em all, dontcha know}.  The biggest surprise?  I don't hate it.

To be clear, the 11 albums of which I spoke are original material - not the 291 greatest hits packages they have out there.

I was religious about getting their disks from 1976 to 1982. Then came their inevitable break, then the lawsuits and the new members coming and old ones going. In theory, it was no longer the band I knew and loved.

Sure, the post-Hunter material had good songs here and there.....but mostly there.

There are equal amounts of good and bad with Pollinator. Nothing that would make it onto any of those 291 great hit packages, but nothing nearly as bad as their last disk.

You heard "Fun" here a few weeks back - which was their initial release. I still like the remix better than the 'album' version, but it has grown on me.

If a CD or .mp4s could be broken up into a half of an album, the first half is clearly the stronger material / performance.

The disk opens with a serviceable "Doom or Destiny". It's got Jimmy Destri / 70s keyboard work. Oh, how I miss that.  "Long Time" comes next - which might be the best song on the disk, and their best song since "Maria" from 1999.

"Already Naked" chorus has an earlier Blondie vibe too. And by 'early' I mean later in their popular era. I even kind of like "My Monster".

Debbie Harry was never the strongest vocalist, but the band's song choices always worked in her favour. That isn't always the case here. So a semi-ok voice (at 71 years old!) , the opening of "Too Much" sounds way too processed. The voice (not the vocals) gets better during the rest of the song, but the guitar part seems sooooo out of place.

"Fragments" is like a rejected James Bond theme (unlike their other rejected Bond theme: For Your Eyes Only - - which is actually pretty good). "Fragments goes on for about seven minutes....and almost at the two minute mark completely changes tempo.  It is interesting until it just becomes a fucking mess.  As Eileen Flowers would say: "awful!"

The musicianship on the disk is fair....not outstanding. Clem Burke, who is an excellent drummer, is wasted here, though less so than on Ghost of Downloads. My guess is his skills would overtake the music as it is now.

My biggest regret is that in the download version you don't seem to get the hidden track that features Laurie Anderson. I am hoping that could have been interesting.

I am not sorry I got Pollinator. It won't be in heavy rotation, but I can select certain tracks and add to playlists, but from a start to finish listening session - that won't be happening.
Posted by Blobby at 12:05 AM

I am a fan, and I liked it. I think it has some of the old sounds to it.
JP