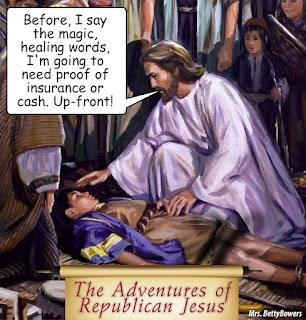 There is a scene in an episode of Parks and Recreation where Garry / Jerry / Larry has a fart-attack. Leslie says that the health plan they are on is horrible. She once broke her wrist and it wasn't covered because having a wrist was considered a pre-existing condition.

The scene was prophetic.

As I predicted, the ACA has been repealed. I won't go as far as to say it is replaced.

All the white men representatives, and some of the self-loathing white females too, opted to barely read the bill and didn't even bother to get a budget estimate on the new one, before voting to rip away something a black man gave them.

Because, let's face it, that's what this is about.

They can attempt to spin it about premiums, enrollment, lower costs, but the truth is:  a black man gave them something. And they hate the black man.  Men. All of them.  They even hate Ben Carson - but it is not like anyone is going out on a limb with that statement.

And yes, they can 'spin' about those ACA bullet points, but since they didn't do a OBM oversight, they truly have zero know-how on what enrollment will be or what the cost to the users or the government might be.

The one thing they do know: rolling back pre-existing conditions.

I know everyone is up in arms (and by "everyone", I mean Facebook folks) about this. To be clear (and kind of fair), the pre-existing stuff only kicks in if you ever lose coverage.  .....which is kind of how it was before, except that 22 million folks didn't have coverage before.

So as long as they don't let a policy lapse, they "should be" golden.

Ohhhh, don't get me wrong, I'm not siding with the SCROTUS Scrotums® on this, but let's not be like them.....let's tell the truth where it exists.

However, the list of pre-existing, should one lapse is quite extensive.

It's all very unclear: becoming paralyzed is pre-existing? Being pregnant is too?  Even if it's your first.....and you're a man?

If the Senate lets this go through, this is going to flame out...........in a big way. But not before thousands, if not millions, are decimated.

Obama did a valiant effort to help reform healthcare in this country. It's not where it needs to be, but everyone, including the Dems, realized that.

Once millions lose out, once hospitals are in disarray, once people start dying from lack of healthcare (yes, that's a jab at you, you Idaho-fuck face Raul Labrador (with that name, shouldn't he be deported?)) and people - even the Scrotums  - revolt, then maybe real change will take place.

And yeah, it will be painful to see the deterioration of what healthcare system (and a country) we have, and yes, for a bit it will make things even more divisive than we have been (which seems unreal), but right now I think it's the only way to heal (pun fully intended).

Oh - I also want Dump and the GOP to take every single iota of blame for the devastation they inflict.

my spouse has 15 of those "pre-existing conditions"; I have 9. I also have a vagina, which means I am dead from the get-go (knowing how the GOPricks feel about women).

OF COURSE this is all about removing whatever good obama did due to his race and race alone.

to quote the old song "how many deaths will it take til we know that too many people have died?" and the GOPricks don't give a fat flying fuck.

Republican Jesus!?!
Yes many of them "claim" to "worship" someone who not only gave away healthcare but also freely fed the poor and taught love, respect and tolerance.

This is what I love the most. The white fundie women. Voting for a pussy grabbing, women hating, let the poor people die piece of human garbage. Cause "what would jeebus do?" Fucking morons.