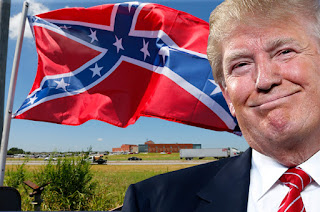 Since I post only once per day - I'm sure many other sites have already touched upon SCROTUS' inane comment / question about the why there was a Civil War and Andrew Jackson's dismay for that it ever happened.

I'll repeat something I wrote weeks and / or months ago:  is there anyone dumber than this man?

The question is and isn't rhetorical.

As it turns out, there are about 63 million people dumber than Dump....and they all pulled the lever for him.

But, as someone on the intertubes chided:  why is a 70 year old man just now asking about the Civil War?

But the real question is: why did he have to ask the question in the first place?

Unlike my question, his didn't seem to be rhetorical. I think he truly did not know about the origins of the Civil War. Nor did he really know who Andrew Jackson was, or at what period of time he existed.

Chelsea Clinton should know better than to poke the bears, but I'm glad she did.

The bears are those internet trolls.

The first, easiest, and most obvious retort from anyone with a kindergarten education would be:

Why didn't SCROTUS use Goooooogle?   Or you know, learn it in history class like the rest of us? Hell, he was born so much closer to the Civil War than many of us.

Dump is too stupid to even have 'alternative facts' on this one.

Yet, he's playing to his base (the uneducated southern rednecks......(named Colin)....and 'can't let it go' Clinton haters)    ........and no doubt distracting the media and social media from something horrible he's doing this very second, while we are not watching.

I now sit here writing this in the dark.....with only 710's iPhone hotspot to allow me to publish. I think the Dump folks are on to me speaking poorly of their fearful leader.

and THEN he said the constitution should be thrown away cause it's archaic. JFC! and the dumptards nod in agreement like bobbleheads.

I saw his twitter handle and had to go look. Yep, he is from Arkansas... my neck of the woods.