Don't Let it Bring You Down 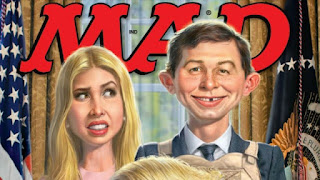 I SO want it to go down.

While Dems (and myself) are loathe to admit it, SCROTUS is seemingly harder to take down than he should be.

He's deflecting things right and left - and by the justice department's own admission, investigations starting now can go on 'well into 2018', which probably won't affect mid-terms as much as we would like.

I am restless that while embattled, Dump will still sail through his presidency wrecking havoc on anything he sees or touches. He's like King Midas.....and we do know he likes his cheesy yellow gold everything.

But if I've learned anything from most movies is that everyone has a vulnerability, something that truly brings them down.

If SCROTUS isn't such a megalomaniacal asshole, he might worry that his behaviour would and could bring down his family.

I am just loving this investigation shit in to Jared Kushner.

Hopefully what hurts Jared, hurts his wife. What hurts Ivanka should, in theory, hurt Dump.

That is assuming Dump has any feelings for his own children when his ego and bravado don't get in the way. I would not bet a dime on that. He'd toss them both under the bus if needed. I get that.

What I want to see is the moment Ivanka figures that out.

Oh don't get me wrong. I shan't shed a tear for that vag.

Of course, Jared is too rich for jail time. But I love how the Washington Post has been pursuing this story for weeks, with 'a White House aide' being the focus.  No names, though Kushner has been leaked since day one of those publications.

And while I think he's guilty of something - many things, actually - I still feel this is all a distraction from something even bigger.

Song by: Annie Lennox
Posted by Blobby at 12:04 AM

spouse was just musing if the dump has health issues and might die in office. hopefully when one domino falls, they all fall!