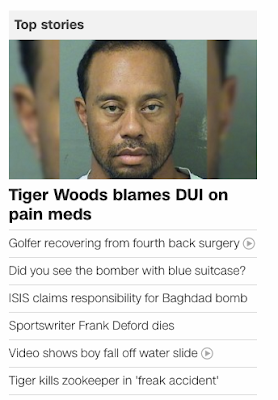 Driving under the influence.  But of what?

We assume booze, don't we?  That's our go-to. But he says 'no', it was pain meds, as if that is more socially acceptable.

Granted, the man has been plagued by surgery and pain and hasn't won a major since 2008, so that could drive a man to take a handful of dolls.

It's his statement to the Jupiter Police Dept that had me laughing - - thanking them for all they did in this situation.....as if that will free him from any liability. I suppose I'd try to butter up the po-po if I were charged too.

Still, if you scroll down the news feed in the attached image, the man killed a zookeeper for chrissake!

Oh well, when you're a 'star' you can get away with anything.

he looks terrible. he's no arnold palmer. his star has faded.

Tiger should be caged so he doesn't drive any more.

and he's not even rich and white!