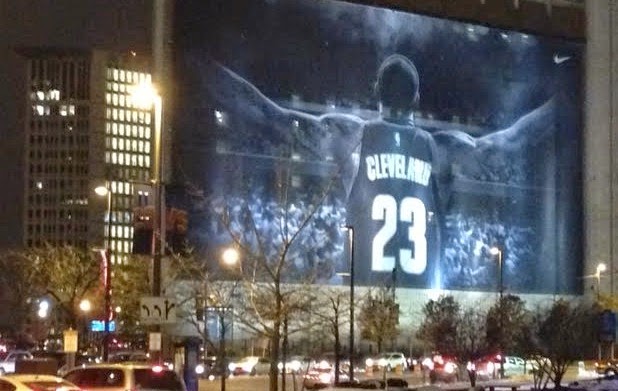 Last night was another Believe In Cleveland yoga event - they've done the Rock Hall events, a museum event and one for the opening of the Gay Games.

Clearly, I'm always happy to attend these, it seems to me that the 'Believe ' folks might want to partner with other parties to create other events. 3-4 annual events based on doing a Balancing Half Moon seem fine, but clearly leave out multiple factions of this fair city.

And, getting into one of these yoga events is becoming increasingly difficult - to the point that I'm surprised I even bother to try.

This one, which was held at the Q (Quicken Loans Arena) was filled up in - what they say was - 35 minutes. I signed in and up at the 22 minute mark and it was already filled, so not sure where they get the additional 13 minutes. I was #3 on the waiting list to get in.

Being #3 on said list, I might have gotten in as time got closer, but when they abruptly changed the date due to a conflict at the arena (really? how did the either organization not know it was spoken for?), people dropped out like flies due to their own conflicts and I was in.

I'm getting to know more people in the yoga community, but ironically, the people with which I normally practice did not sign up, or could not get in - so I thought I'd be left to do a practice without the normal folks. As it turned out four others made it, but I only practiced near two of them.

Everyone at BiC was jazzed about doing it at the Q because of LeBron's return.

Honestly, I think I am the only one in this city that does not give a flying fuck about this man.

Yes, he will help fill seats every single night. Yes, the surrounding businesses will prosper because of the increase in attendance. Yes, he might be a changed man.

But to me, he's still the asshole who fucked around in the play-offs, refusing to take shots, refusing to score and leading the team to an early exit from championship contention. And he was being pissy because (allegedly) his mom was screwing some of his team members. {awk-ward!}

And to me, he's still the asshole who waited to make his decision and announcement of leaving (in a live hour-long proverbial middle finger to Cleveland telecast session on ESPN) after the ability to do any other trades could be taken place.

He knew he was fucking Cleveland over  - and he did it on purpose. Twice.

And now all these fucking people are on their knees kissing his size 16 Nikes.

I'm just not one of them.

Still, I laid my mat down where he goes up and down the court - and for whatever I think of the man (which is little) if he brings a certain positive focus to the town, I'm for that.

2014 has brought Cleveland the Gay Games. It brought LeBron back. It secured the GOP National Convention for 2016. The football team is actually on the upper part of the win-loss section in their division! There is a vibe to the city that comes around about once every 20 years. We're on an upswing.

Because of the GOP thingy, we'll see a plethora of renovations of buildings, infrastructure, urban renewal, etc. Whatever I don't think of the GOP (same lines as Mr. James), that focus will only help Cleveland thrive - and the bottom line is that is always a good thing.

On the super plus side: at least we're not getting a papal visit.

This was an ok event. Nothing outstanding and it was limited to less than 600 folks, as that is all one could it on the basketball court. 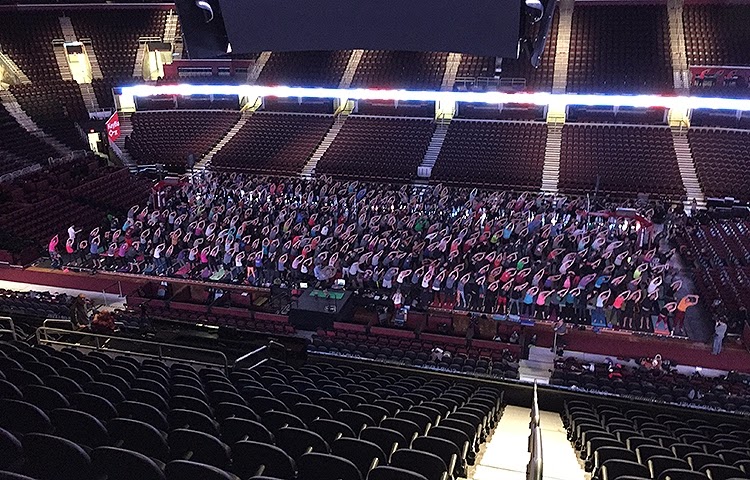 I was super lazy and barely took any pics (including the one right above - which is someone else's), and the ones I did were before the event. Nothing during. I figured they had photographers and a drone (yes, indoors). And they live streamed the event so people could practice at home. Allegedly, the filmed event will be posted here.

And somehow I ended up in the front row. Well, not 'somehow', but on purpose. Everyone had two or so inches on either side of their mat. I was feeling boxed in farther into the court, so at least the front gave me one side of no one near me.

The downside is, it is easier for photography and video to capture your practice. I expect to see crumby photos popping up over the next week - with me in them.  (christ - they're already there.)

There was no announcement of the next event. I'll wait and see how it goes - maybe I'll sign up, maybe not.

idiots here are falling all over themselves with delight about the pope's visit - I don't give a fat rat's ass. and I thank the dogs and cats I don't work in the city cause THAT event will be some fucked up shit!

and all our sports teams suck too.

we were trying to get the dems to come here for the 2016 convention.