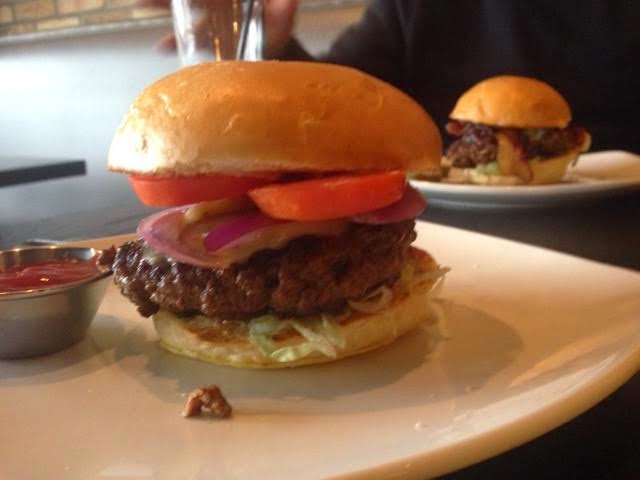 I don't normally do restaurant reviews, because normally what would you people care? It's not like many of you are even in the area to go (or stay away) from my notices.

GrindBurger (oh no, no website, so no hyperlink. It's only 2014!) is a new place in a Cleveburgh suburb. Open three weeks. That alone should have made us stay away - as it hasn't been open enough to work out all (or any) of the kinks.

An article in the local paper said the married owners had opened multiple restaurants on the west coast before coming back home to open one here.

Read: they failed at multiple business attempts and are now living with family members while trying to get another business up and running.

Based on this experience, if they don't change / fix things and fast, they'll be living in a shelter with another failed business to their credit. Or discredit, as the case may be.

First - the "hostess". Lord, what a mess she was. No eye contact. No greeting. No personality. No nothing. She sat a table of six while we waited to even say 'table for two'. That took over five minutes. Oh - and the place was maybe half filled.

I heard her tell the two men before us that it was a 20 minute wait. Huh? For what? Again - half filled. They left in a huff.

She told us the same delay. I asked if we could sit at a table in the bar, and that was fine, but the kitchen put the 20 minute delay in - so either way, no one would take an order for 20 minutes. We should have left then.

As we waited, the table of six got up and left. That couldn't have been good.

Then I got annoyed.

Our buzzer went off. That's fine. But here's my thing about that - the hostess had to activate that event. But when we got up there then she had to look for silverware and menus. Really?  Honey, let's have a little chat about efficiency.

As she took us to our table - one of 20 available, it was dirty. As were the ones on either side of it. And no one had been sitting there upon our arrival 25 minutes earlier. But did we go to one of those other tables (which may or may not have been clean, I suppose)? No, we stood there and waited for her to get cleaning supplies and complete the task herself.

Clearly, I was duly unimpressed. Oddly, I wasn't as grumpy about it all as you might think. Being with 710 as my company has a lot to do with that.

All that aside, it comes down to the fud. French fries were not too bad. I wouldn't bother getting the onion rings again. The batter wasn't all that.

I did think the fryer baskets were cute enough. 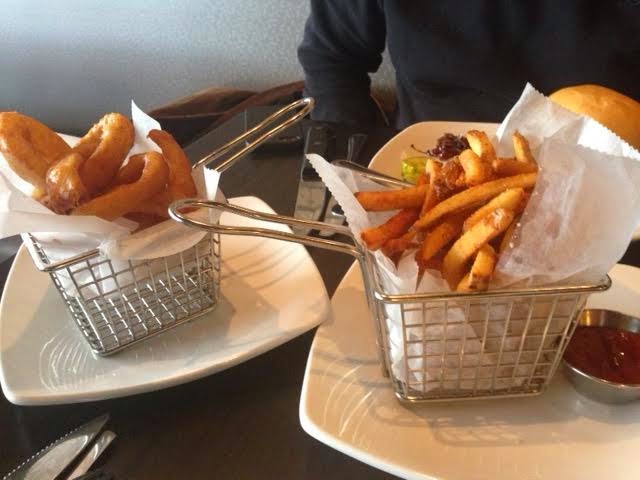 As for the place's name, it is because they double-grind the meat. Admittedly the burger was good. The selection of toppings (garlic cheddar cheese?) were new and interesting. They cooked my burger as ordered, which shouldn't be a big thing, but I'd say 60% of the time, any given place doesn't know what 'medium well' actually is....or doesn't care. The waitress did a decent job with the service.

I'm not sure it the food and service will ever be enough to get me back in the doors. As we witnessed, it had people leaving before they had a chance to get the semi-redemption of actual eats. And they will tell two friends - and so on and so on and so on.

If that word of mouth continues - they're doomed.

WTF? sounds disgusting. bet they will be outta business before the spring.

What made you decide to try it? Curious minds.

The fryer baskets are cute, but they cannot save bad service ... unless you put the hostess in it and deep fry her.

Maybe you should have gone there before the inversion class.

Well...that answers that. We briefly talked about giving it a try. Nope. If I really want a burger, I will go to B-Spot or pref. Heck's.

The fry baskets are too cute. I would have walked out with those, call it a parting gift.

You read it the same way I did: "they failed at multiple business attempts and are now living with family members while trying to get another business up and running."

We get a lot of those that pop up in these parts, and so far they always have ended the same way. Closed.