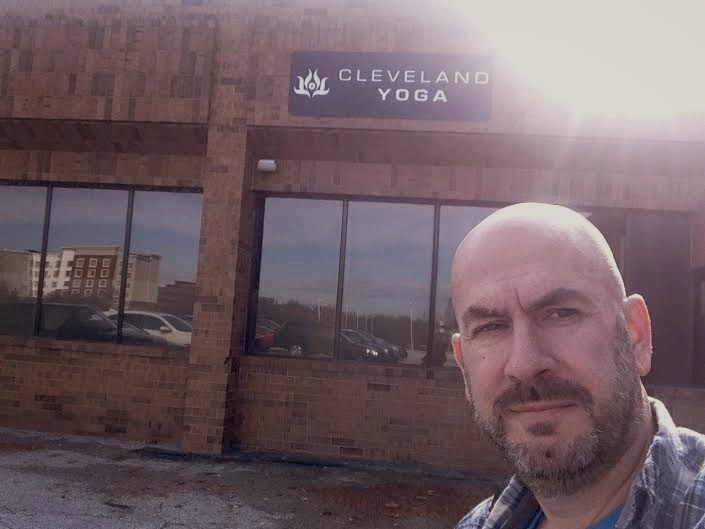 Only because David was out of town did I go to a yoga workshop by myself. The plan would have always been to go with him, but timing didn't work out.

The workshop was inversions. While that technically, in yoga terms, means your head is lower than your heart, most often it means you are upside down.

Most of these are a form or variation of Tadasana - just upside down.

But one can lose their sense of self when upside down. I don't know exactly how I am situated and to figure that out pretty much means losing my balance and falling on my face....or head. I needed help. I needed some kind of guidance to get me to that next level of where I wanted to be. This workshop said they'd get me there.

They lied stretched the truth.

First off - I didn't manage my expectations. I had messaged the person running the workshop who said they could get me up into my headstand and I believed her unequivocally.

Second - (again with my unrealistic expectations) I assumed there would be more individualized instruction. There wasn't. There were 30 fucking people in the class......most of them better than myself.

These folks weren't interested in headstand. They'd moved past that. They mostly wanted forearm balance or handstand.

I was just fucked from the start.

Thirdly - Cleveland Yoga is arguably the premiere yoga studio in town. It has the most name recognition, if nothing else. The vibe there is completely different - from instructors to students. It was my first time there and I'm 99% sure I was the only non-Cleveland Yoga student in the workshop. It all just didn't bode well for me.

Now I had achieved headstand against a wall. Amy, the instructor, doesn't believe in using walls, so we set-up in the middle of the room. I get that walls can make your posture not straight and you tend to cat or cow your back or belly by using such a prop......but on the other hand, you have to start somewhere without the fear (of falling) getting in the way.

Of course, I have done the building blocks for handstand before. Working on my jumps and core work if I am ever to get there. Admittedly, I do not do it frequently or consistently. That, I do need to work on. And it seemed a little defeatist that Amy said it took her seven years to achieve handstand.

Well what the fuck was I coming to this workshop for then? But that's on me, not her. Again, my expectations were not aligned with potential reality.

After handstand was forearm balancing. I was just as successful in this endeavour. Once again, we practiced building blocks - which I know are important, but I felt I was getting nowhere fast, but hard to tell, as there were so many students, there was no clear direction to what one was doing right or wrong or how to improve on that individual basis. It was all very general.

A half-hour later we were onto headstand. Finally.

Of course, we learn two ways. Women usually do not have as tight of hamstrings as men, so they can float their legs up. Men, in general, walk into the pose, putting knees to chest (while upside down) then eventually extending the legs upward.

I get that this is to find your center of balance.

Getting up on my head, against the wall, is no problem for me. I just didn't want to topple over onto anyone in front of me. Most studios are crowded places, sometimes only having 3" between mats in front of you or to each side. The potential of my 6'2" frame being the beginning domino is very high if I have no sense of control.  .....and that was my real goal for this workshop.

Before I even left for yoga, I did a number of headstands at home, against the wall and not. Granted, I successfully did tripod headstands when not against the wall, which, while isn't always frowned upon by the yoga instructors, it is not their preferred method. During the workshop, we were not allowed to use the tripod method.

I found myself ending up tucking into a roll as I would flip heels over head time and again.

I left this workshop like I did when I was starting yoga - like I knew nothing and was not progressing. The difference then is I didn't pay extra for that dejection. This was $30 extra. Yay me!

I'm trying to be positive about it. Yes, I expected to come away with a new skill. No, I did not expect to only come away with building blocks to achieve those skills. So hopefully as I continue to work on that, I can recall some of the talking points during this session.  ....and I didn't fracture any vertebrae...that I know of.

And on the plus plus side - Scott taught the class before mine, so we chatted for a few minutes and he was hot (literally and figuratively) and as sweaty as I've ever seen. On the super-plus side, he didn't stick around to see me make a fool of myself.

I'm learning headstands using the wall as a prop. My instructor has me holding up to 3.5 minutes now. She says after I hold 5 minutes we will pull away from wall as she is building my strength. They are not easy, it takes some core and I am amazed at how a headstand can make you sweat. Today she added handstands (wall prop) and those really take the strength, oh my. I'm definitely not up to being in a group of 30 and without a wall as a prop yet. Kudos to you for getting in a group like that.

And... I might have liked to have seen the domino effect happen.