I was looking for an app that would let one do photo desaturation.

So far, each one has been crappier than the last. But even a bad review is still helpful to someone.

Oddly enough, when I played with these apps ('play' is not actually the operative word, since you have fun when you play), the movie Pleasantville was playing.

Granted, what that movie did with targeted colorization is well beyond the ability of my iPhone, but I thought that maybe technology had come a little farther than this.

Honestly, I don't know what I'd do with a localized color photograph, but I thought it would at least be a tool

My first attempt was with Color Splurge. At first I thought it was a bad app - and it is, but it's not quite what I was looking for. It grey scaled your photo and then from a colour wheel you had to fill in the areas you wanted to have tint.

That didn't work on a few levels. Getting the colour right was one , and on a photo - like the one below - the branches in front of the sign also got coloured red (or blue).  No no no no. That was not what I was looking for.

Secondly, to draw in between the lines you want highlighted, regardless of how small you make the 'brush', it's almost impossible to make exactly how you want it. At least on a non iPhone 6 or 6 Plus.

Thirdly, there were the ads. They'd pop up and open your browser, even though you were working in the app. Horribly annoying - at best. 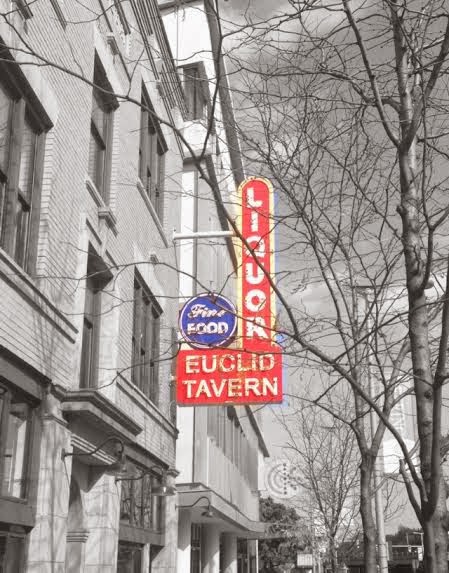 So then I tried iQuickSplash.

This app was even worse - at least on some other levels.

The upshot for this one was, that all you had to do was erase the gray to reveal the colour you wanted exposed.

In theory, that seems easier, but you still have the issue of a big finger on a small iPhone 5 screen. It took a lot of practice to get to the above image - and if you can look closely it's only about a 96% success rate.

The amount of ads on this app was annoying as well, but not nearly as annoying as how many times the app crashed and took you back to the main iPhone screen. And you automatically lost whatever you were working on.

On the plus side, because I had to start over so many times, I got better at navigating the control of my finger on the screen, but still, it was far too annoying to keep beginning again and losing all your work.

I feel there has to be a better program out there. Probably better ones for laptops than handheld devices. But you probably have to pay for those.

These two apps were free - but as they say, you get what you pay for. Nothing gets nothing....or next to.
Posted by Blobby at 12:01 AM

Unknown said...
This comment has been removed by a blog administrator.
3:59 AM EDT