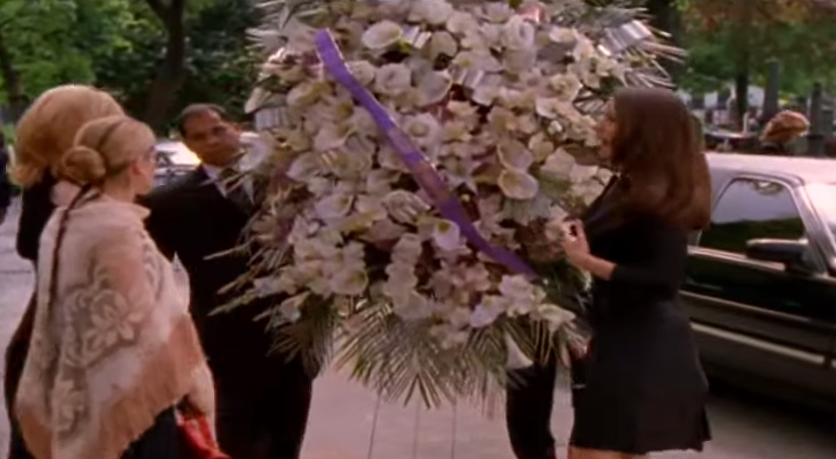 Yesterday I went to a funeral.

Back in Seinfeld's heyday, during the Pony Remark episode (easily one of their top 3 shows). There was an almost throwaway comment regarding how long a funeral might last, as Jerry had another commitment - and Jerry remarks, "even Oswald's had to be 45 minutes".

I knew the deceased, but I went for my uncle. Tom was the longtime companion of Marion. They'd probably been seeing each other for 15 years or so, though they've known each other longer.

Tom lost his wife almost 20 years ago to Alzheimer's. Unfortunately, he had to live through the experience again with Marion. Even for the last few years, she did not know who he was - which is sad. Harder for him, I'm sure, as he visited her twice a day - every day! - after she went into a care facility.

Marion's husband, Bob, was injured early in their marriage and he lived as either a paraplegic or quadriplegic....for decades.

Unfortunately, the morning started out with horrible freezing rain, leaving anyone from my immediate family from attending. This I did not know until I arrived, so I was the sole representative from our branch. It made me feel good about showing and talking to Tom for a while before the service started.

I spotted cousins and second cousins hanging out in the back, so I joined them only minutes before things go going. I didn't even have a chance to greet everyone.

I found it very nice that the death announcement and the service referenced Tom frequently. Marion's son has always included him in family events, etc. And he sat right up front with the immediate family. None of "us" really knew their family....hence hanging out in the back.

All was well and good, though I never know what to make of these later in life relationships where all of the sudden, people will say, "now Marion and Bob can be reunited......"   Well where does that leave Tom, was my thought.

....and then there was the eulogy.

Having just given my father's, I fancy myself an expert at what is good and bad. Yes, I have a mighty high opinion of myself and my death talking skills........thank you.

Marion's nephew gets up. He starts off talking about his upbringing on how he was told he had to always be respectful, honest, nice, a light heart.....etc  - things that were unachievable for a child. mmm....ok.

He went on to talk about the area back then - before Wal*Mart, or Wendy's. Or Subway. Or when gas was $0.19 a gallon.

I started rubbing my eyes at this point.....since I wasn't sure what his point was going to be.

He eventually started to ties some loose ends together, talking about how Marion actually embodied those traits of respectfulness, honesty, etc.  Ok....makes a little more sense.

He went on to say, that Marion was so sweet and Bob was so gruff, he never understood why she was with him.

He said this in front of the entire crowd - including their son.

Had anyone looked my way, I'm sure they would have seen a raised eyebrow. One declaring impropriety.

This guy, then discussed how he had not been around the last 25 years like his brother had been, and I immediately back-storied that he had been in prison and just recently released.

When he ended his talk with asking everyone to do the Serenity Prayer, I immediately dismissed my imagined prison stay for him and exchanged it with a quarter century of binge drinking and rehab.

I leaned forward to whisper to my cousin Jack - who is almost exactly my age - and told him to keep a straight face and not laugh, as he was sitting next to his parents and his 96 year old grandparents - then I said:  worst. eulogy. ever.

Jack's a professional and didn't chuckle or even crack a smile, even though I know he appreciated my review.

Maybe a new line of service for me would be to contract out my eulogy writing skills. It's a niche market for sure, but one I could corner easily. Because, as when of my sister's asked me how it was, without going into detail and stealing from had to be a Larry David line, I replied, "even Oswald had to have had a better eulogy".

Song by: Joni Mitchell
Posted by Blobby at 12:07 AM

Wow. Frozen drive...then a bad eulogy. I hope you enjoyed the remainder of the day.

I did go to CLE FLEA on Sunday...thankfully. I heard they had a two hour wait on Saturday.