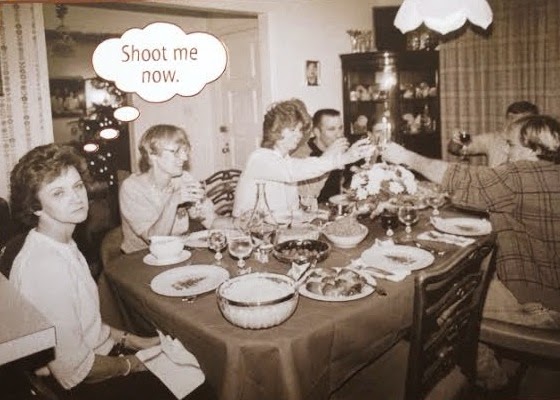 I get that everyone (else) loves Thanksgiving, but as I've said the last 11 years - it's just not my day. Or meal.

I like Turkey sammiches with Miracle Whip, plenty of salt & pepper and lettuce the next day, but that's about where it ends.

The last few years my mother has been exact about buying the right sized turkey. Or meaning: there's been enough for the meal and nothing for leftovers.  .....which would have sucked for my father, as turkey was his favourite meal.

Allegedly, my mother bought and additional turkey breast this year just for leftovers.

My sisters all chimed in before myself on what they were bringing, which left me a vegetable. I was told 'salad' is not an appropriate side for Thanksgiving. Bullocks.  Not only do I find it perfectly acceptable, it is the one thing I know I would eat.

For whatever reason, there will be this plethora of desserts. Allegedly both an apple and pumpkin pies will be present. A chocolate cake. My mother is making cupcakes too. It's a wonder we even need potatoes or stuffing. If I'm loading up on calories, it will be in desserts, not monochromatic food choices.

I lost out in our selection for what we were going to bring as a side: cauliflower gratin. 710 won and we will be bringing a corn dish instead - one of which I will write up for you later, after I actually make it.

Three-fourths of my sisters will be present, and all their kids (and husbands). Almost a full house.

I already told my mother that my oldest niece wins the round of 'what are we thankful for', as she will request all the grandkids to participate in that farce event. My mom knows enough not to include her own children in such a charade.

But Katie is in her doctoral program at FSU, and last week she can be thankful for not being in the library, thus avoiding another school shooting.

That should top anything with which her brother or cousins can create.

I hope you all enjoy your Turkey Day.

Song by: Jefferson Airplane
Posted by Blobby at 12:07 AM

it's a day off work, I don't eat turkey, I don't watch football. I feel like the woman in your picture. AND I get to spend the day with my racist redneck in-laws. OH JOY! (sarcasm)

You bring back for me a pleasant memory of leftover turkey sandwiches made with mayo and lettuce with seasoned pepper. These were my mother's way to use up leftovers (rather than turkey soup).

I've never heard of anyone that didn't like Thanksgiving food. Hope you enjoyed the family visit despite the food.