Standing on the Edge 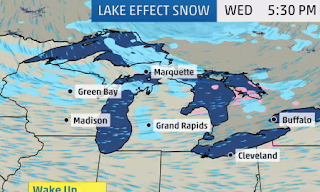 I sometimes find myself forgetting how bad weatherpersons can be when they need to boost ratings. The name of the game is to scare viewers.

Every storm now has a name - no matter how small the storm. It's not just for hurricanes anymore.

'Astro' is this one's name. I guess they're now going alphabetical with winter storms like they do tropical ones?

For a week we've been hearing about the 'polar vortex' (we're starting too early with this shit) coming from the Aleutian Islands and making its way past Banff to Minnesota and possibly to the Great Lakes region.

Monday and yesterday were in the mid-to-upper 60s. In November. Petey and I had some great walks.

Until 16:00 yesterday, there wasn't a cloud in the sky. Yes, it has gotten overcats (no, not a typo), but it stayed warm until the 'big front' came our way. 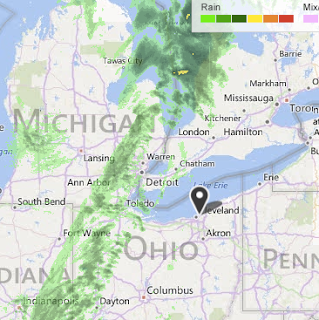 Yeahhhhhh......that doesn't look so menacing as a 'front'.

Hell, my leg doesn't even hurt a little. But supposebly (no, not a typo) we will plummet from 67 to 40 (which is still more normal for November) and to the upper 20s as the lows at night.

That's not optimal, but fuck, it is not a fucking polar vortex either.

Which is a good thing. The new snow blower arrived and it fits in the garage (barely), but we haven't tested it.....or even put gas in the sucker. Or blower....as the case may be.

But for all the 'lake effect snow' warnings (which for those who do not know, is basically a heavier, wetter snow due to moisture from the Great Lakes, that we receive in greater abundance until Lake Erie freezes over, usually in mid January) we've been getting since before this storm actually hit the Aleutian Islands, now we might - MIGHT - get some flurries on Thursday and Friday.

If there is any accumulation, it is expected to be less than an inch.

Hardly worth me putting out the snow stakes and gassing up the new mechanical snow-throwing beast.

Just one other reason not to watch local news.

I don't suppose you can just keep that cold front for a few more days so we can continue the mild weather here in Boston through the week.

I often say I miss the midwest but then it becomes November.....