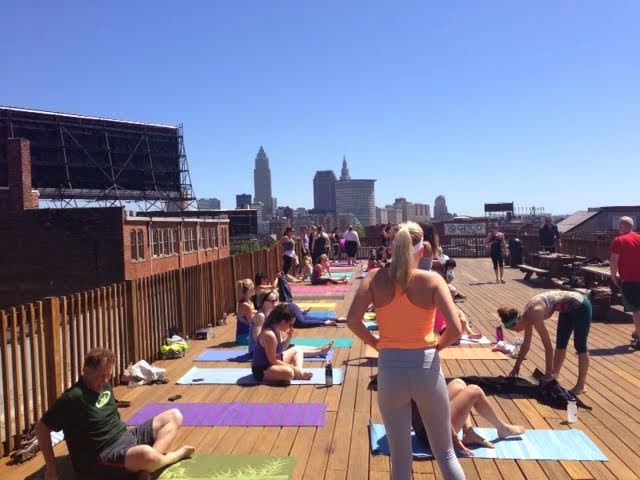 I didn't think this one through.

Sunday started off sunny and clear, but on the cool side. 70 degrees to be exact, when I left the house. But it was nearing 11:30 before the rooftop yoga session got under way. I should have planned better.

I thought enough to take sunglasses and slather myself with SPF 30. I did not think about my solid black mat.

I have done outdoor yoga any number of times, but that has been in early morning or in the evening. Not mid-day. The mat was, and stayed, cool before.

In the past there had been shade, not what you see in the title image:  full sun, no clouds, no trees, little breeze and a hot hot deck.

Remember when you were a kid and you could walk on hot asphalt while barefoot - or at least had contests on who could stand on the black top the longest?  What?  That couldn't have been only me.

I was a master at that. I had no problems standing there, possibly in slight pain, but resolved in my ability to best my friends. Clearly, that time has passed. I am now a pussy.

My mat was set-up for maybe 10 minutes before class started.

That was like putting a pizza stone in an oven to get warm.

Oddly, my feet had little problems on the actual deck. But oy - the practice. For the first 50 minutes I suffered through my Down Dogs, Warriors I and II and any number of lunges. Those seemed to be the most painful. Singed feet. People on either side of me had to hear me say "ow"multiple times, and it was not because the poses were that incredibly difficult.

I would "pedal out my dog" not to stretch my hamstrings, but keep at my feet partially off the burning coals that became my yoga mat.

Honestly, I'd say I didn't know why I didn't just pick up my mat and leave.....but then on the other hand, I do know why.

Yes, he's easy on the eyes, but I do go for and like his teaching method and his booming yet reassuring voice that we are all doing a great job. I'm almost sure he's talking just to me.

...but it wasn't just because of him that I stayed.  I'm not one to walk out of a class, even though I should. I've learned this with Spin and Insanity. I mean, there are times I should have walked away, but stayed and regretted the decision.

I'm not sure I was doing a 'great job' the other day. I finally thanked the gods when we did some balancing poses. With Tree, Airplane and Eagle, I was assured of at least having one foot entirely off the mat for minutes at a time. And just when that one remaining foot would be unbearable, we'd switch feet.

I was never ever ever so happy to go into Boat and Bridge/Wheel poses. Those are on your back, for anyone who hasn't practiced before.

The guy next to me, Andy (?), - who had a light coloured mat - finally saw my agony and offered me a towel. While I graciously accepted, the damage was done. He kind of gasped when he saw how red and cracked my feet were. Oh and now we were on our backs, so the feet didn't matter so much.

While doing Down Dog, and looking through my legs, I saw a woman behind me who had the same mat as I. I have never seen a woman with this mat. While technically there are not girl or boy mats, the sturdier, darker ones tend to attract guys and the thinner pinker, purple, chartreuse ones have 'girl' written all over them. Figuratively, of course.

I did talk to her after class. She claimed her feet were burning too, but I mentioned she didn't look like she was struggling. She replied that I wasn't looking hard enough. So, at least it wasn't just me.

Since there are a number of outdoor classes coming up in the next few weeks, I have some take aways. Now, most of these classes are in the early morning hours or evening time. But at least two are in the day - assuming no rain. I will bring a towel to throw over my mat. Or I'll bring my lighter coloured mat (i.e. only semi-girly).

And Scott was great as usual. He did a good job with folks he's never really taught before and kept us moving, seemingly oblivious to some of us being on the verge of getting heat blisters,

I'm not saying Scott is straight or gay. I would have no way of knowing. Nor is it any of my business, or matter. I'm just saying in his playlist he had throbbing, pumping, disco dance versions of Fleetwood Mac's "Dreams" and Simon and Garfunkel's "the Sounds of Silence" (the latter just fraught with irony). 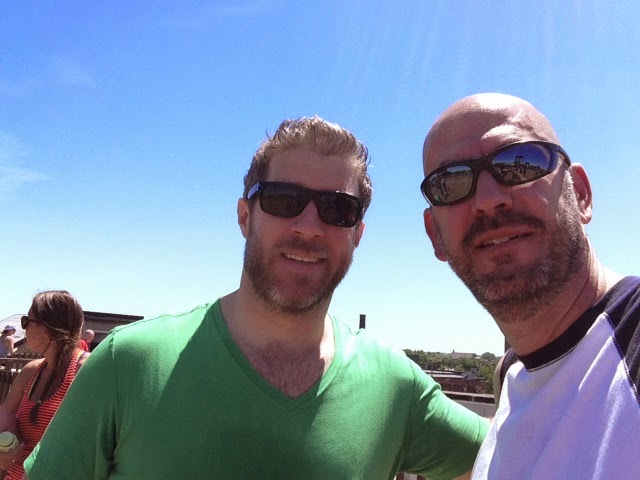 of course, you ain't so bad yourself, dear. no wonder you managed to snag 710.

take care of your footsies and bring a towel next time.

I've done the Asphalt Challenge. I used to be good, now ... not so much!

I always thought that - if and when I do yoga - I'll have the manliest, baddest-ass yoga mat possible. That thing will have skulls and guns and mud-flap chicks on it. It'll smell of stale beer and cigar smoke and have a built-in whoopee cushion.

But it never occurred to me until reading this that there may also be an element of comfort to consider. Do they make reflective silver mats? That would solve the solar heating problem and even out your SPF 30 tan. Or maybe buy several of those "Chillow" things I see advertised and duct tape them together?

Your post made me laugh outside at the thought of everyone hopping up and down on their yoga mat. What is that German word that means you get a perverse pleasure from another's misfortune?

I am fascinated by what goes one in a mixed-gender yoga class. I have had downright hostility for being in yoga class from women who didn't want men there.