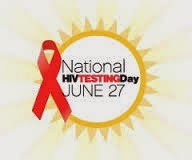 Today is National HIV Testing Day. Yes, there is such a day. There's a day for everything.

It'd be nice to be at a place and time where a day like this is no longer needed, but depending on whom you listen to or read that could be years away - or decades.

Time has changed how I feel about testing, but I'm not sure how or if my perceptions are true. Mind you, I started getting tested back in the '80s. The 1980s, that is.

There was a basement portion of the Columbus Department of Health that only 'you know who' went down there to get 'you know what'.  I don't know there were really judging eyes then, but it seemed like there were.

Education is not the same as it was then - for the caregivers or the patients.

Hell, one of my first counselors was named Cesar Chavez. Surely, he was using a fake name, I thought (and don't call me Shirley). But alas, that was his actual moniker.

And while testing methods may have changed over the last {gulp} 30 years, some of the associated uncomfortableness has not.  The questions you must answer just seems like a huge pointing finger at your life, your choices - though no doubt, the counselors have heard it all before, if not worse, from others. Naturally, you think you're one of 'the others'.

Then there was the wait.

The wait for the test to be run - days upon days.  The wait upon your return, sitting in the lobby to be called back to get your results.

Then there was the longest wait: the walk to and sitting in that room. The time from sitting down, to opening your file, the counselor perusing said file, to getting the news. It was an eternity.

I would normally go with friends to get tested, but go alone for the results. There were some realities you just didn't want to face - let alone with others waiting for you.

Working more in the medical area, and the years of exposure (pun intended?), make you take a different look at it, though I realize I'm not everyone, nor they me. And there are those of us who have lived in a world without HIV and AIDS, but the younger generation have never known a time without - so to be honest, I don't know their perspective, their reality.

It is important to get tested. It's not necessarily a pleasant experience and I'm guessing it's still stress-inducing, but it is so much better than not knowing or assuming.

And on Sex and the City (or as Brian from Family Guy described it, "so it's about three hookers and their mom?")  for all the boinking they did over 14 seasons, as far as I know, only one half hour ever touched on HIV. Most of it encapsulated into a 1:14 clip, but it somewhat touches on what one goes through at an HIV clinic albeit with a little "humour".

amazing that hiv is now along the line of 'get tested' like HTN or DM or cholesterol.