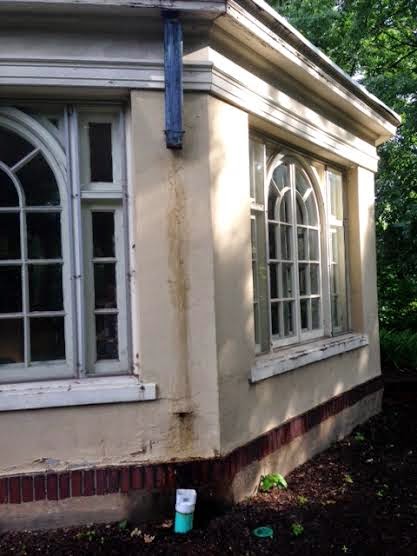 Being the email administrator for our 'hood, I see lots of things come across that people want to send out:  houses for sale, road closings, lost dogs (oh wait, that one came from me!), babysitters wanted...you get the idea.

And information about neighborhood crime is reported there too, which you no doubt remember I did back in March.

So last week, I was asked to send out two seemingly separate messages: one about a suspicious vehicle possibly casing the 'hood and the other one about stolen copper downspouts and gutters.

I don't think it is just a Cleveland thing, but the theft of copper is rampant here. Thieves hit vacant or foreclosed houses and steal the plumbing - inside and out. They also hit houses that are occupied, just not their indoor plumbing........that I know of.

Oddly, two days later it seems they caught the folks who stole copper downspouts and gutters from houses in the hood. Oh yes, multiple.

You see, in Cleveland, they now require scrap metal intake people to get information on anyone attempting to sell metal. It requires ID, and I think vehicle registration. And these morons are good at thievery, but not at forging IDs.....as they put down their real address and license plate numbers.

The vehicle in question was the one that was casing the 'hood. So not unrelated after all.

After they were caught, one of them 'fessed up multiple houses. When police investigated, other residents did not even notice their items missing. I sent out this message as well.

One would think that with that message, that one would go and look around his house to make sure one's gutters and downspouts were still intact.

So Tuesday, in between humongous downpours, I went out to get the trash to the street for pick-up. At that point I notice water cascading from the roof into huge puddle. Normally one would not see this as the water would normally be transported to the ground via a downspout. That is assuming that downspout still existed.

Nor did another one when I walked around the house. 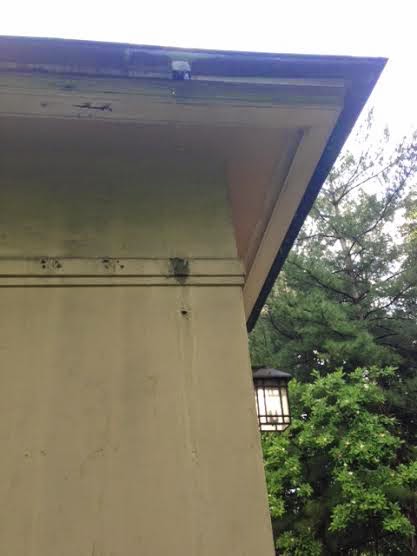 Our entire gutters, going around the house are copper, but they are 30' up. But when it comes to downspouts, only two of the original ones are....or were....copper. The rest, over the years, prior to us, had been replaced by shitty aluminum ones.

You know our deal. We live on a border of two cities, neither of which thinks is their responsibility. But I called the more responsive of the two for one main reason: they had dealt with the other thefts and this might be wrapped up into that.

I can't honestly say when the downspouts went missing. It is an item one rarely looks at unless it's raining (which you are usually not outside during).

The cops arrived (not too bad looking) and we went around looking at what was what. They asked for an estimated value, but I had none. Not only was I not expecting to have to, they are original to the house - meaning over 100 years old.

Ruckiry (?) (not Jon's boss), the police recovered the stolen copper so they can see if the pieces match / fit. But as 710 said, he's sure the robbers were not gentle with them, so they are probably bent and / or broken. Replacements will most likely need to be obtained. 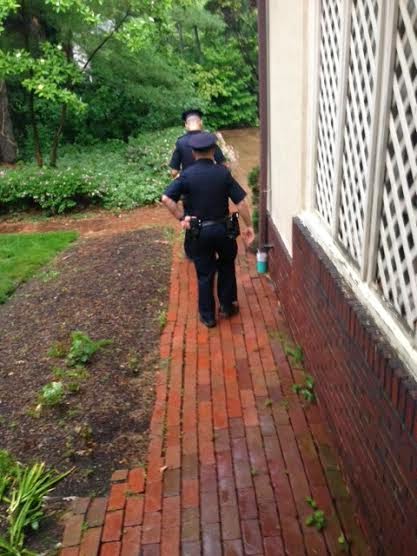 also did their homework....kind of.  The cuter of the two mentioned that someone from 'this address' identified other robbers back in February.

I raised my hand, saying it was me, and it was in March. I think that bought me some cred with the po-po. They also liked that I told their dispatcher not to send out a cop in the rain. The damage was done and it wasn't an emergency. But they came anyway.

Though the cops scared the shit out of me at 22:00, ringing the doorbell as I was doing dishes. They returned, wanting to take pictures. Being pitch-black out and pouring, I said it was fine, but if they wanted to wait to come back in the light.....but they waved me off.

They think the guy perp who is spilling his guts might let them know if they hit our house too.

We will wait to see....and then I guess have insurance pay for replacements, assuming it is above our deductible.

So, this makes the second time we've been robbed in less than three years.

I know copper theft is big in these parts. People have had their outside HVAC units stripped in the middle of the day. And several dumbasses have died because they were pulling power cables with the copper and got zapped.

Hopefully you'll get your original gutters back and in good condition. Especially because of the age of them.

copper is stolen around here at an alarming rate; new home builders have gone to PVC pipes inside, aluminum/vinyl gutters outside.

I've heard of folks stealing the copper plumbing but I never thought about copper gutters and downspouts.
That's just so brazen!

In the rural areas outside of our town, thieves target vacant homes and steal the A/C compressors.

Sorry for your loss, and I hope they 'find' your downspouts.