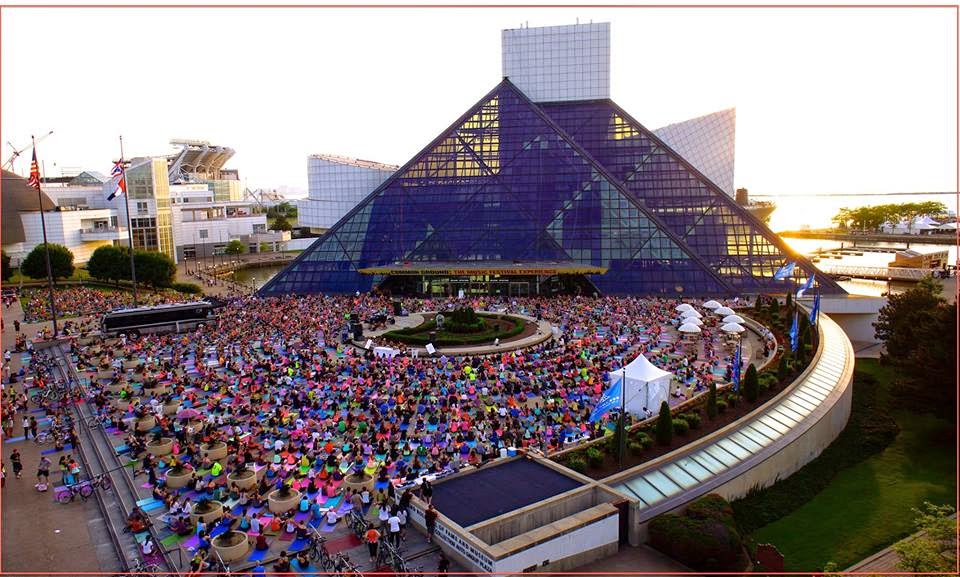 Last year, depending to whom you speak, there were 1100-1500 attendees. This year, they were claiming more than 2000 folks signed up, but as of yet, I have yet to hear actual estimates.

There didn't look like many more people from last year, but I suppose those on the other side of that circle in the middle of the plaza could have been larger than before.

Publicity seemed to have an up-kick as opposed to 2013. The head of Believe in CLE, Tami Lyons, was making the media rounds. Actually, that worried me a bit, thinking that too many people would show.

With yoga mats spaced only 4-5" apart, organizers actually wanted people to move so they were only 2" apart. I saw one person comply with this request. There was room farther out, if people wanted it, but no one was willing to move closer just for the sake of being closer.

My take?  Get there on time. Every bit of information said to get their early due to the crowds. David and I arrived 45 minutes early to claim our space....and there were almost 1000 folks who arrived prior to us.

The practice itself was ok. Not great. Not as good as last year. This year it was about 75 minutes, as opposed to the almost 120 before. Maybe because I have done a few big events, the "magic" has worn off a little. Last year it was so frickin' cool to see (est) 1500 do the same movements. It was this year too - just not as much.

I think many of us agreed that there was a huge missed opportunity with the Hall 'o Fame.  2013 saw actual rock and roll music being played. This year, I would call it Menstrual Rock. You have to worry when Coldplay plays the most "rock" oriented song.  Honestly, we didn't know most of the songs, though Tami claimed often "sing along.....you all know it....it's on the radio all the time".

Granted, I do not listen to radio often, but even I have a greater working knowledge of today's music - whether I actually listen to it or not. And for that 'sing along' shit.....I didn't hear one person, which means they're all to shy or no one actually knew this so-called 'hit'.

Michael Jackson was possibly the only Hall o' Fame inductee they played and it was some craptastic song at that. None I could actually name. As David said afterwards: "they had an entire year to come up with a play list."  True that.

Since the practice was shorter this year, it was not as necessarily creative, but that is ok, as there were a lot of different levels of experience in one place. I pride myself on that two years ago I could barely do a Balancing Half-Moon, even with a block, and now it is fairly natural with out any additional support at all. I'm still working on Inversions, even asking random yoga instructors if their studio does these classes - to teach, not just to do. I'm still waiting on a affirmative.

And unlike 2013, there was no fucking around with the food afterwards. The lines for the food trucks (which actually showed this year) were far too long. I'd have succumbed to starvation by the time I got to the actual truck, let alone got my order. Nor did we patronize the street which basically turned me away last year for not having sleeves on my shirt (though I did this year......just in case).

David kind of nailed it, that the build-up and anticipatory talk of the event far exceeded actually getting there and doing the practice.  Still it was fun and I'd do it again.

Here are some shots of Friday's events. Most are not taken by me. Obviously. Including the main image and the one below. 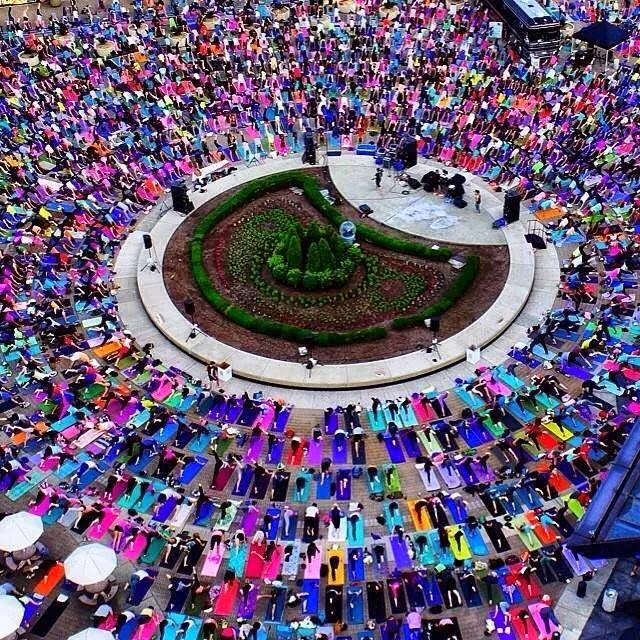 No.  Those pictures were taken by this: 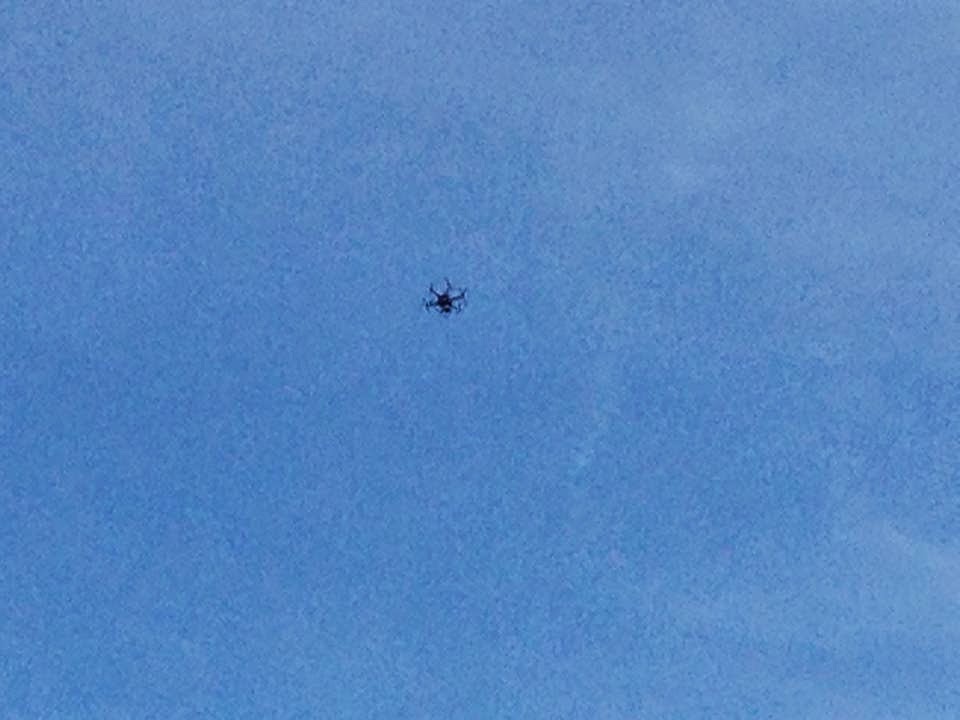 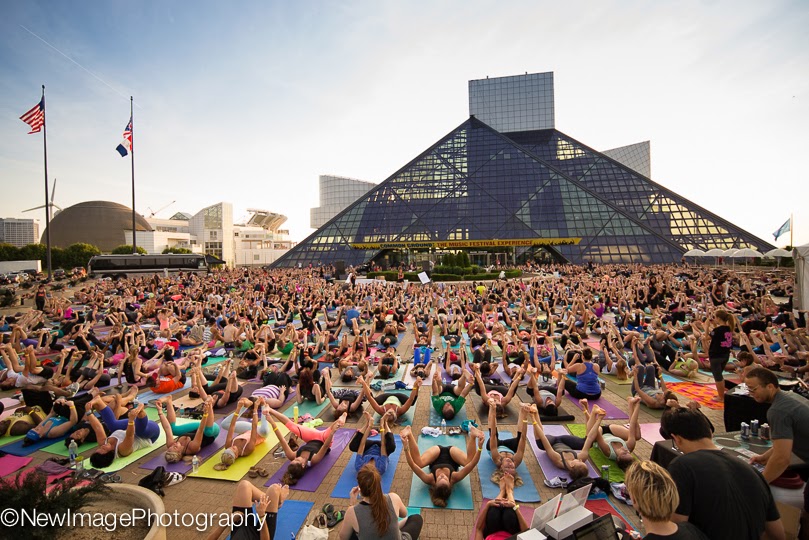 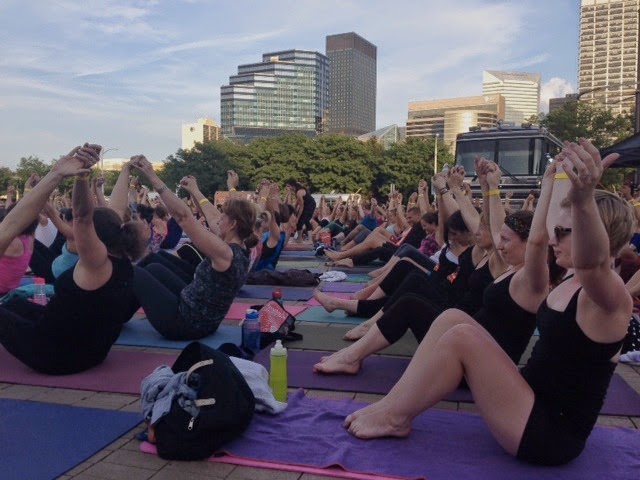 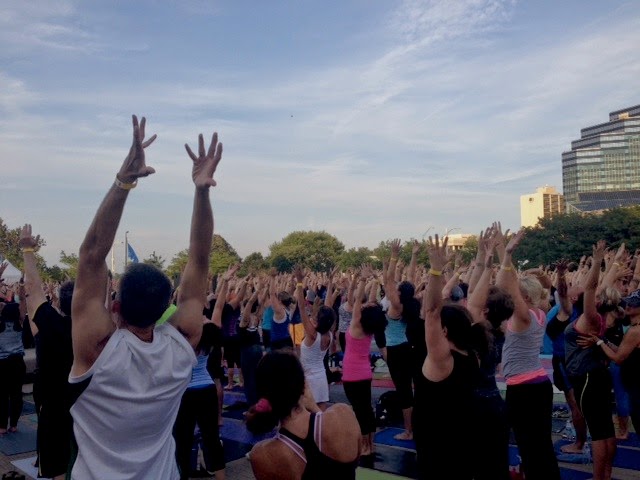 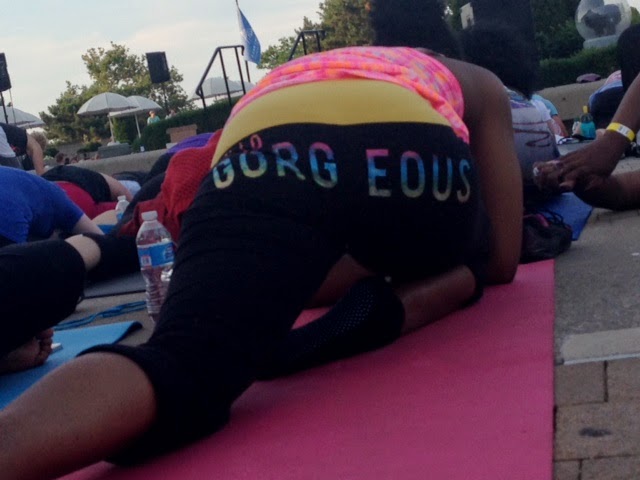 I got a little flack from a woman we were practicing with for taking this picture. But I figure if you put "Hello Gorgeous" on your ass, you kind of have to expect it to be snapped. 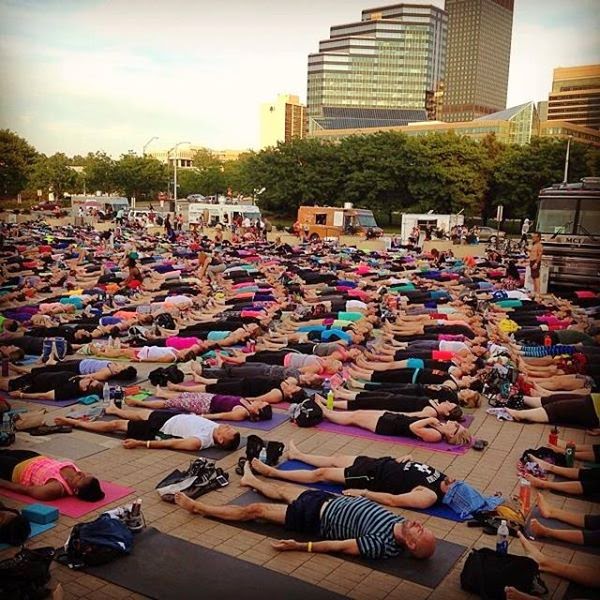 One of the best pictures of the evening came from David himself. While he isn't resting in Shavasana, he took an amazing image of those of us who were.  (I'm at the bottom of the pic in a striped shirt.)

No matter my little criticisms of the evening, it was great to see so many familiar faces that I have met over the year through the gym and so many yoga studios and events.

And one handsome yogi basically got to see me deep-throat a popsicle that was melting everywhere. But that's a different story. And no, 'popsicle' is not a euphemism, though he friended me on Facebook moments later.

I feel like someone just hit me in the head for not having a V8 but after reading about you attending this event, I realized that you're more into yoga than just a practitioner.

As for the music, was the MJ song possibly the one they just released that he recorded around 1979? It sucks in 2014.

I went past the local assisted living home near me yesterday and they were having some event for the residents with tents and a DJ and the DJ was playing music teens would like. WTF? Talk about not knowing how to do your job or your audience.

Kidding! Actually, these pics have a sort of a rock concert vibe to them, which is sort of both strange and fun at the same time! Hope you had a great time :-)

You fail to mention what flavor of Popsicle helped to get the handsome Yogi to friend you?

To go with you new drag name:
Poppy Sicle

Am I the only one who thought that last photo looked like the aftermath of Jonestown? ;-)