I Still Believe in You 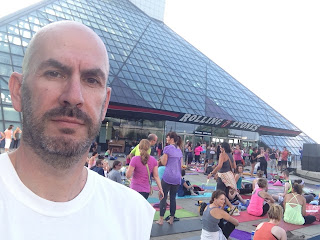 Friday evening I made my way downtown to the Rock 'n Roll Hall o' Fame.  There was a planned event that a number of folks wanted to attend, and I said I would go.

Lest you think it was a concert, it was not, but one called Believe in Cleveland: a night of yoga, music, mindfulness and connection.  And food.

It was also about how Cleveland never gets a good rap and we are a great city. I notice most of the people who joke about the city have never been.  But it has a lot going on.

About 1,100 of my closest friends I'd never met were there.  It seems a fuck of a lot of people do yoga in Cleveland and not at the studios to which I go.

As it turns out, from the yoga posse, there were only six of us who attended - at least that I saw. Since we didn't have a pre-determined meet-up spot, I'm amazed that Nasim, Debbie and I even found each other.  They had "dates".  I did not.

Oh, I asked 710 and two friends to come with, and that they could show up after yoga and we'd hit the food trucks. I really wanted to sample the food trucks.  But as I then found out yoga wouldn't start until 20:00 and it was a 90 minute class, no one would have wanted to stick around until 21:30 to eat, or wait around for me to start eating.

I gotta say, the yoga was great. It was a challenging hour and a half with no regards level of practice. If anyone was a beginner they were kind of fucked. But it was kind of beautiful seeing so many people go through their flow. 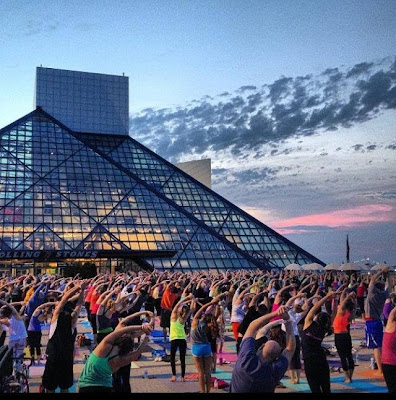 The image is not mine, but I loved it and am using it.

It was extremely humid.  Thank g-d for the breeze off the lake.I was dripping halfway through and almost considered going shirtless, but you can all stand down, I did not. I'll wait for my cousin to do semi-naked yoga.

While yoga is usually accompanied by serene music, this wasn't exactly the case:  Prince, Led Zeppelin, the Rolling Stones, U2, Billy Idol and others were played, but I have to say, fairly well incorporated.

We did our "ohms" and the guy next to me was trying to be heard five rows ahead of us. It's not about that - but he tried his damnedest. ...and I didn't know it was possible to 'ohm' in a flat key, but lordy he did it - over and over. 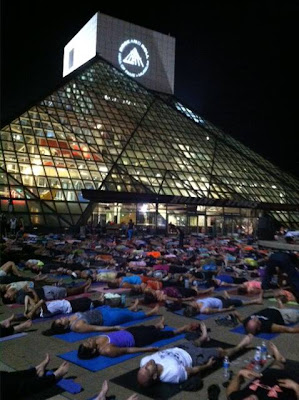 Shavasna. You can't see me, because I am much closer to the Rock Hall doors. Again, the image is not mine.

At the end of the practice, the hosting group took forever to give their "thank-yous".  I was all, "Shut up - I want the food trucks."

The five of us opted to walk up to the "hip" district to get food - mostly because now it was 24:00 and it is downtown Cleveland. It's about the only place to get eats at that time.  And since we, especially me, were dressed so casually, we opted for The Corner Alley, since it is a bowling alley.

Oh yes, I'm hyperlinking them here so maybe they'll go and see my comments. Or so that it warns people who might Gooooogle their name and see my post, to avoid it at all costs.

As I was in a sleeveless t-shirt, I was told our group would not be seated or served.  Both women however, had sleeveless tank-tops, which I pointed out, but it was I who was the offender. Clearly a double-standard, but then I don't have a C or D cup. So they refused service to us both with inside and outside seating..........at a fucking bowling alley that thinks it is way better than it is.

Mind you, this is a Friday night on the most crowded street in downtown Cleveland. They had only two tables occupied outside and another two inside. It's not like they had lots of opportunities to seat anyone at all.

Yes, I get that they want to be a high-end establishment, but you're at 20% capacity on arguably the biggest night of the week and when it comes down to it, you're still a bowling alley - get over yourselves.  Oh - and at the time, not one lane was being used for, you know, bowling.

Russell, from the group goes, "I have an extra shirt for you".  I said thanks, but no thanks,  as I would never set foot in that fucking establishment ever again - loud enough for all to hear.

We walked across the alley to House of Blues, which sat us immediately and laughed knowingly at their neighbor's dress code policy.

I'd like to say I enjoyed my HoB meal, but it wasn't about taste at that point, it was for fuel only. I shoveled it in indiscriminately and washed it back with two beers and about four glasses of water. Then I had to walk a mile and a half back to my car and drive home. While in desperate need of a shower, but I hit the sheets instead.

So, I get the irony that when I earlier said that Cleveland is a great place and we had a great time - and we did.....and then later, we didn't.  But as Donny Osmand once sang, one bad apple don't spoil the whole bunch of girls.  It's just that we find those apples, toss them out and find better ones.

We did make the best of a situation and it was a fun group to hang with for the evening.  One of the folks I didn't know at all, and one I had only met once - so it was nice to sit around afterwards and chat over food and drink.

LOVE the pix! and I don't think you would look good as a D-cup.

It sounds like "The Corner Alley" is already getting their comeuppance, especially if they're only at 20% capacity on a busy night.