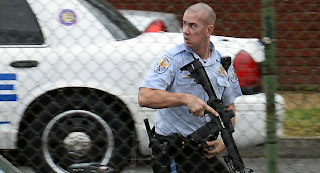 Oy, the screaming headlines with yesterday's killings at the Navy Yard.  Don't get me wrong, they should be in a huge fucking font. Not that we, as a nation, ever learn from this - the violent acts or the reporting.

Wasn't it just yesterday I wrote about Boston or Sandy Hook?  Just a year ago about Aurora, CO? Of course there are all the times I didn't even bother to write about a shooting of some sort.

But how can one ignore a minimum of 12 victims?  Truth be told, how can anyone ignore one, but we do. We are desensitized to the fact, yet as you'd assume, some of the eyewitness accounts are absolutely harrowing.

Oh, don't get me wrong, many of us will all up in arms for about six days before something shiny distracts us and then the NRA quietly puts their hands in their pockets, looks left, looks right and nonchalantly whistles as they slink back into the shadows.......until the next time.

Not long ago I was contacted by a researcher (and her team from onlineMBA), who had read a post I had done back in 2012.  I would think she might have read my Sandy Hook piece too, but perhaps not.

As you mostly all know, I'm skeptical when someone approaches me to blog something of theirs - and actually, I don't think I've ever done it.  Oh, I've mocked a few people who wanted me to review their shitty short movie videos, but never really gone further than that.

But I did watch the video that was sent to me, and I think it's worth a repost.  While it was billed, to me, as "politically neutral", and technically it might be,  I think it skews a little to the left.  ....not that there's anything wrong with that.  ....and maybe that's just my take. No doubt it is the NRA's take.

Truth be told, I knew I would have probably use the attached video and link they sent my way - I just didn't know when. Sometimes the news cycle has other plans in regards to timing.


Regardless of what I think of the NRA, which is not much, economically it is scary on how much firearms are a business. BIG business.

As I draft this, no doubt the backlash from whatever the NRA will say will be in full motion. They'll rattle their chains about the government (read: Obama) wanting to take away their guns.  I already saw a laughable comment on a blog about how (and I quote): "President Obama should do the responsible thing and stand firmly against gun control laws, so that the GOP led House will pass some."

I had to laugh. This is one area in which Obama is seriously lacking.  Obama's administration is way way way too soft on gun control. So much so, it barely exists.  As for the GOP doing anything Obama wants is fucking hysterical!  He could come out for breathing being necessary for life and they'd dispute it. Limbaugh has already taken Michelle Obama to task for saying Americans need to drink more water.

As much as I like Aaron Sorkin and even like his HBO show, the Newsroom, it can be spotty. But he / they do good new story pieces, clearly in hindsight, but.....if there were a true liberal media, the NRA, the GOP and the Tea Party would have all been called out for their bullshit rhetoric.  It is an almost three-minute piece worth watching.

Like my other pieces - nothing has changed. Gun control does not exist nor will it. There is no backbone in any White House, or the Senate or the House.

Background checks, licensing, education and training do not and will not exist. I am a defeatist when it comes to these facts. I believe Wayne LaPierre could obtain a gun, legally or not, go on live national television and shoot his own daughter in the head and and he'd be cheered by his organization, as it is his g-d given right!

Oddly enough, for the 400 times I've been to DC, I've seen 'Navy Yard' as a stop on the Metro, but never been over that way.  Now I feel it should be another stop at which to pay my respects.

The artist attached to the title today is almost no accident.  It is unfortunate in certain ways that I have so many songs with 'gun', 'kill' or 'shot' in the title  - though I don't think that is an accident for our society either.

I 100% agree with you. No one outside of Dianne Feinstein has the stones to do anything about gun control, and it's only going to get worse.

At the same time, being a T-girl means I'm a target for bullies. Bullies tend to travel in groups and prey on LGBTs walking alone. If I were allowed to once I come out and transition, I WOULD pack heat to protect myself. No questions asked.

Part of the reason why I own a pistol crossbow is to teach myself how to shoot anything with accuracy, including a gun. I can own a gun where I live, but I cannot fire it unless it's in self defense. The pistol crossbow? That's a different story altogether, and why twice a week I'll fire at least twenty bolts at a foam archery target.

I'm not a big fan of Congress or the President when it comes to gun control, but in order to survive sometimes you have to do whatever it takes. If that means lethal force, then I'll do it if it means preventing the local LGBT community holding a candlelight vigil for me.

So when I turned on the news this morning they were complaining about Obama not canceling his speech during with he called out the Republics about so many things but specifically about holding the government hostage AGAIN!

They were all saying he should have canceled and waited because 12 people were shot and many DC places were still in lockdown. BIG FUCKING DEAL! is what I wanted to scream and did at them! We're in 2 wars, looking to start a 3rd, in 2010 85 people were killed each day by guns! If we wait and delay everything then even less will be accomplished which although improbable (since so little gets done now) is still possible.

I wish all those for gun control would just look into a camera, stick their thumbs in their ears, wave their fingers and say, "I TOLD YOU SO! I TOLD YOU SO!"

Guns are inanimate objects. Its our culture that is the problem.