Here Are Many Wild Animals 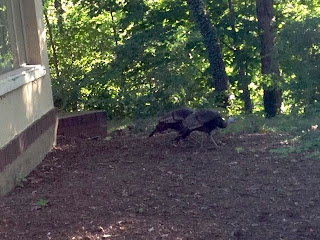 I mentioned a few months back that our 'hood had wild turkeys.

Apparently they are back. Maybe they never left, but if not, they've been keeping it on the DL.

Neighbors said they saw three together.  I've seen them a bunch over the last few weeks, but always two at a time. Never three.  Maybe our neighbor needs new glasses.  Even when she got a picture it was only two.

However, the image you see is mine from yesterday.

On coming back from our walk, Petey was very animated as we trotted up the drive.  There they were, in the middle of the yard. He wanted to go at them, but I was having none of it.  I don't know how wild wild turkeys are.  They ain't small, that's for sure.

As they walked around our two large maples, I watched the squirrels trying to approach the trees, but too afraid to get near these things. I have no idea what wild turkeys eat, but I'm guessing not squirrels.

The squirrels actually made the turkeys flap their wings, but I think they be flightless birds. Still the flapping got the squirrels to run, so it is a defense mechanism. I would have no idea what Petey would try to do to these guys, or vice versa - and I wasn't finding out.

I did go back out and try to capture video, but they went down the hill, on foot, fairly quick. I barely got this still shot.

Of course, if they charged me, I didn't know what I would even do.

Run like a girl, I suppose. Though not in Birkenstocks. They'd catch up to me and kill me.

we too have them occasionally. they like my birdseed. and they don't overstay their welcome either.

Wild turkeys are one of the strongest flying birds, even the big toms. It is the domestic, bred for the most meat birds that can't fly. Hell they have so much breast meat now they can't even mate - they're all artificially inseminated.

Interestingly they were re-introduced back into the wild by the ODONR about 10 years ago and now are finally being noticed as their breeding has taken hold.

My pistol crossbow could take them out from 40 yards or less, but then again I don't have the heart to shoot at a live animal unless either my girls or I were in danger.

Petey would have had a ball chasing them. When my dog chases turkeys they learn to fly real quick. But this is at a park. In the burbs that could be dangerous with cars and what not.