Judgement of the Moon and Stars 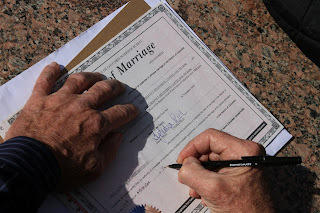 I have been hesitant to write anything regarding same-sex marriage recognition in the state of Ohio for a while now, but not probably for the reason you think.

If you had not heard - and most of my readers have - that in late July a gay couple in Cincinnati who had married in Maryland had sued to have their marriage recognized by the state of Ohio.  One of the husbands is afflicted with ALS and they wanted his inevitable death certificate to reflect their marriage status.

Federal Judge Timothy Black granted that request and the State of Ohio did not appeal the ruling. However, to be safe, Judge Black extended the order until December 31, 2013.

And two days ago, the same judge issued a temporary restraining order (which doesn't quite sound right, but.....I'm not a lawyer) to have the vital statistics office issue a death certificate for another married gay couple, to have them listed as married.  One of the husbands in that relationship passed away unexpectedly.

This is good news - though it is happening at bleak periods in those men's lives.

The part you have not heard about, and most likely will now not, is that in early July of this year, 710 and myself were approached to be plaintiffs against the State of Ohio to be recognized by the state. It was to be a coordinated effort of four couples filing in four different federal courts:  Cleveland, Columbus, Cincinnati and Dayton.

The couples were to be one that was married (us), one that wanted to be, one that had children and I don't remember what type the fourth couple would have been.

This would not be a lawsuit to overturn the ban on same-sex marriage, but an extension of DOMA and that our relationship / marriage should be recognized and treated as legitimate in a state that does not have same-sex marriage rights.

710 and I talked it over for a short period of time before agreeing to do this. As a couple, we would certainly give up some anonymity and give those who don't know us exposure to our life that we normally would not.

But on the other hand, with the ruling of DOMA and Prop 8, which had just happened, we were thinking of being advocates and activists in the process.  We contacted the lawyer who asked and agreed to be one of the couples.

Our would-be activism was short-lived.  Probably.

The ALS couple, g-d love them, kind of thwarted what was soon to be the four filed lawsuits. With Judge Black's ruling going to the first of the year, we were put on hold to see what would happen. With his new ruling yesterday, it seems less and less likely we will have that opportunity.

Of course, Black's decision is good, but I'll be honest - I was hoping to be a catalyst for change - and not just by signing a petition or voting on a referendum. We wanted to really be part of the change agent.

I'm a little stumped that our right-winged governor and attorney general are not defending the State against the complaints. They did says they would fight the ban on gay marriage, but this is recognition, not the ability to marry.  It's a fine line, but I'm wondering what their end-game might be. This is out of character for these two. There has to be a shoe they're gonna drop, right?

I also wonder with these two rulings, and last week's IRS announcement, that they would recognize same-sex marriages regardless of what state the couples now reside (trust me, we'll be looking into how we file and what benefits us the most - because the IRS isn't completely altruistic), and yesterday's  Justice department notification that military benefits will go to spouses of veterans, how much of a hindrance or need there will be for same-sex marriage for each state.

If Social Security goes the way of the IRS, the DoD or the Justice Department, that really only leaves a few state laws (i.e. state taxes and some hospital regulations) that separate us from opposite-sex married couples. And if CMS or HHS put rulings in regarding reimbursement for hospitals to recognize us, then that medical roadblock will fall as well.

If all those things happens, why wouldn't states then allow same-sex marriages - could it expedite moving marriage through the system?  Or on the other side, why would they need it in every state - except for that state tax thingy?  It's possible they won't make that change because they don't need to. We can get married in 13 other places and still live where we want without the state feeling the need to perform these marriages.

Honestly, I don't think the fight for the right to marry would dissolve, but I think it could get derailed by the likes of NOM, if they need another tactic to beat their chest on the "sanctity of marriage'.  I can hear them say - you've got your rights recognized, all states don't need to allow you to marry.

....but then you have the National Guard from the lovely states of Texas and Louisiana who are defying the Department of Defense on providing benefits to same-sex couples. Since that crosses state and federal governance, I don't know who has the ruling, DoD or the state?  Someone pull back any and all federal funding for those branches and let them go it alone.  Kind of like those ass states that don't want FEMA, until a hurricane, tornado or a chemical plant blows up.

So even in that case, federal rights don't matter and I don't know that state passage would mean anything different to mindsets like those.

Either way - right now, I applaud Judge Black, but was hoping to we'd play a (bigger) part of that. Imagine those blog posts!  I'd have material for months!

Alas, not now.  At least unless something happens with these two rulings. I have not heard anyone scream 'activist judge' yet.  My fingers are crossed that we do not.

Song by: Joni Mitchell
Posted by Blobby at 12:05 AM

I would so love to you and 710 over the headlines! (At least if it's about marriage, etc.) I would point you out to my friends as an agent of change. I really hope you get to have the chance. There's nothing quite like making a difference. You've already done that in my life, with your friendship. Here's to bigger horizons!

I could have said I knew you when! I hope you're not needed but I think even with a favorable outcome, you're suit will be filed.

THANK YOU to you and 710 for your courage and commitment! Just saying yes is huge

Finally, don't forget about the blog hits! You're numbers would go through the roof! Petey and Sofia would need agents.

Like SEAN, I too want to say thank you to you and 710 for your courage and commitment to be yourselves, and to be an example.