Wouldn't you know it - a few hours after I publish the last My Music Monday segment and Arcade Fire comes out with their new song - the title track from their forthcoming album Reflektor.

I will say, at the initial listening, with the first third of the song I was a little put off.  I'm not a huge fan of Régine Chassagne's vocal style, so after I could get past her few solo lines, I was fine. She's a better co-vocalist or background vocalist than lead. But the last two-thirds "Reflektor" either found its groove or I found it - or a little of both.

Granted, the song is over seven minutes long - about 90 seconds too long, but still it works. I've listened to it dozens of times at this point and it doesn't get boring at all.  Personally, I dig Win Butler's delayed vocal on the title word from that of Chassagne.

While Arcade Fire is clearly their own band and has their own style, their new song has, odd as it might sound, hints of Bowie and even Duran Duran in their mid-years. It's a good mix.  Actually David Bowie appears on the song, albeit briefly (very shortly at the 4:03 marks and then for about 30 seconds at the 4:50 mark).  As far as I know, Simon LeBon shows up nowhere.

While I get that the band is not for everyone, they have always been innovative with their videos....like their one for "We Used to Wait".  (you have to have Chrome as your browser for that.)

They did two videos for "Reflektor". One for all to watch - posted here below. It's......um....interesting.

The second is, again, tech savvy. You need a laptop with a webcam and Chrome. You also need a smartphone or iPad (again, with Chrome). Yes you need both devices.  There is a lot of hoop-jumping if you want to see this version of the video.

For those interested you got to this site on your browser.  There they will give you a code in which you put into your iphone/ipad. 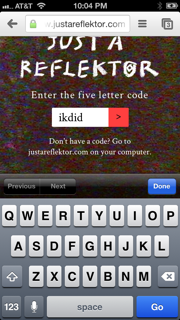 After you enter the code and hit enter, at this point, you have the iphone/ipad face the laptop.  The video will play, but you have the opportunity to make it do certain things by moving the iphone/ipad in front of the webcam. It has mostly to do with light and reflection.

Yes, it's work, but at least it's not a crappy / lame Beyonce, Lady Gag Gag or Katy Perry video.

But if you're not that interested - you can listen to the song via their other video.