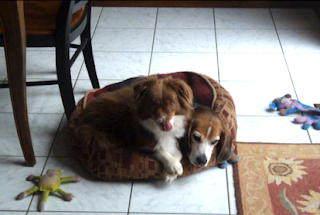 For those who are newer to my blog, or don't read for content, or have retention deficit issues, a little background on Petey.

He was my sister's dog and we took him in about 16 months ago - and have never looked back. But when he was at my sister's house, he had a brother. Not a biological one, but a Miniature Australian Shepard, named Boomer.

Boomer was, and is, a herding dog. Boundless energy and smart as a whip. But he is four years younger than Petey, and as such, Petey is somewhat the alpha in that relationship - not that you'd get it from the title image.  Or most of their images.

Boomer runs rings around Petey - literally, but that's his breeding. However, Petey would also steal his brother's bed and would sleep on both, which is why Boomer slept on top of Petey.

We took Petey to my parent's house last weekend. Unknown to us, my sister did the same thing with Boomer. It was like old home week for the two. They picked up just where they left off. 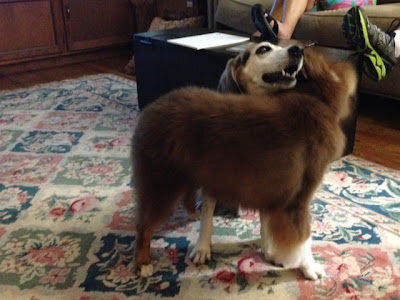 doing their "fight" / play thing.  There's no bad blood between them. 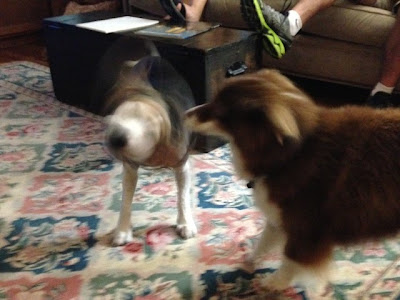 I loved Petey shaking in this pic.  You get the nose, kind of the eyes and maybe an ear. 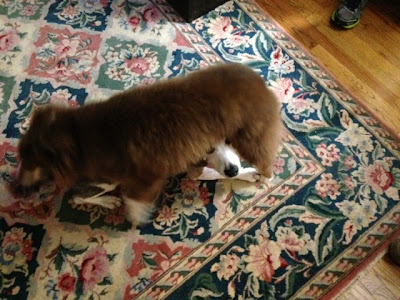 Boomer trying to pin Petey down.  It didn't work.

Not only did my sister and brother-in-law love seeing Petey, so did my parents and so did Boomer.

this gets even better!!

I am surprised Petey's tail didn't fall off and fly away