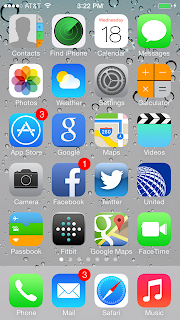 Well, I guess today would have been the day for a post on who I am picking for the Emmys.  However, my "adversary", Mike, has gone radio silent - both in blog and email*.  He must be one hard-working chump champ.

It's ok, we'd probably just tie anyways. And looking at this list this year, it'd be 100% guessing - so much of what's out there I haven't seen, so I'd rather just skip it than lose.  ....not that I'm admitting defeat to him.

So, I guess I'll just move on to another subject matter:  Apple OS7.

Man - all the griping and grousing from folks on the download. You think they were building the pyramids.  I'm sure Twitter was swarmed with hash-tags of #firstworldproblems.

I don't know what they were doing, but from download to installation mine took all of 20 minutes.  What's the big deal folks?

While I've only been using it for 30 hours or so, I'm not quite sure what to think.

The look, itself, makes it look like a 3rd grade girl did this for her art project.  I'm not digging the juvenile look to the screen.

710 had to tell me how to delete emails. No longer is it a finger slide to the right for delete, but now it is to the left. What's that about?

Allegedly the battery life is now better - that remains to be seen. I do notice it takes longer to charge the device (I have the iPhone 5). Before, it was pretty quick to charge - now, not so much.

That said, there is a little functionality that is ok....mind you, only been exploring for 30 hours.

The actual phone looks better, though now there are four buttons when a call comes in. Like I don't have enough choices with "Accept" or "Decline".

I like swiping up from the bottom of the screen - as it brings up your music, camera, flashlight, calculator, airplane mode, bluetooth, brightness, airplay (if you have Apple TV),  timer, volume, and some other stuff. All right there at your fingertip.

The Find My iPhone app is now better. The phone, if stolen, cannot be cleared or reused unless your Apple password is put into the FMI app. If no one knows that password, they are fucked. Tech gurus and Apple claim, hundreds of thousands of iPhones will be not be targets from thieves once they figure out they cannot by-pass this feature. Here's hoping they are correct.

I'm not sure how I feel about the camera. The way to move to video, panorama, or their version of Instagram is ok, but not that easy to do if you need it quickly.  Maybe that will change the more I get used to it.

There are a lot more changes to this OS than I thought there would be - and I dare say more to discover that I don't know about. The pre-release news was all gloom and doom, but it's not. Tech reviewers seems to really like it (along with the new S and C versions of the phone).

On another good note, Mike has promised to send me an apple pie he's baking from apples he is picking this week.**


* Ok, not completely true. Wouldn't you know he emailed after I finished drafting this post.
**Promise not actually made, just suggested from me to him.
Posted by Blobby at 12:01 AM

It took longer for those of us in real & metropolitan cities.

I can't wait until you complain about what they did to the music section - HATE IT!

I'm glad I'm not the only one that thinks that Sir Jony Ive had stroke while holding a box of crayons.

And how weird is it that I couldn't figure out how to delete emails either? I don't even know what made me try the opposite direction, but finally figured that critter out.

I've also noticed the Find My Friends app has kind of freaked out. Half the time, it can't figure out where people are.

Other than that, the jury's still out on what I think about the overall business of it. Granted, it's not like I actually have a choice...

Unless I switch from the iPhone, that is.

So glad I clicked "Comment". I had not stumbled across the idea of swiping emails the opposite direction to delete so reading Eric's comment was a huge find. I was going to say that the only thing I disliked was the loss of swipe delete in email - now I know it is still there.

I like the way the windows work in Safari much better. I like fact that you can have add more apps to each folder and that they need not all be visible. I use a screen lock code and that works better too.

(I missed your Emmy picks. I got HBO and Showtime a couple months ago so had seen more of the nominees this year than in the recent past.)