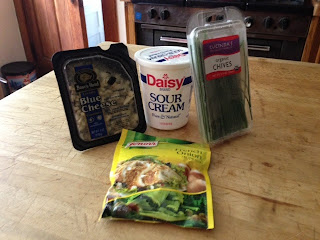 Yes, it's 9/11, and I have not forgotten, but I won't be bullied into doing an annual post about that day.

We can talk about something more tragic - my cooking.

Last Sunday, 710 and I attended a bar-b-que at one of our neighbors house. They requested we bring chips and dip.

Chips and dip for 10 people?  That sounded, well.........boring. But I'm a good party guest and do as I'm told.  I mean, I wasn't exactly roped into what kind of dip or chips to bring. Many would bring store-bought dip and Ruffles.

Oh, I considered making salsa, but I had done that before, so I did go back to the thought of regular dip, as we were only asked about 20 hours before the party. However, in good conscious, I couldn't buy Dairyman's dip, but I wasn't making chips either.

So I compromised, I bought potato chips, but some nice kettle ones - Shears with 40% less fat (though less than what, I don't exactly know)  - yet I was going to "make" the dip.

Trust me, it wasn't a stretch. No limbs were gone out on.  As you can see, four ingredients. Total prep time was about 7 minutes.  Tops.

You know how this goes:  sour cream goes into a bowl, then the soup mix - stir it in until it is well mixed.  Then add the blue cheese and mix again. Chill for an hour or two so the flavours set.

If the dip thickens, you can add milk and stir in to thin it out a bit, but a good stirring will do the same thing.

I did chop some chives, mostly for presentation.....because, I am after all......me! 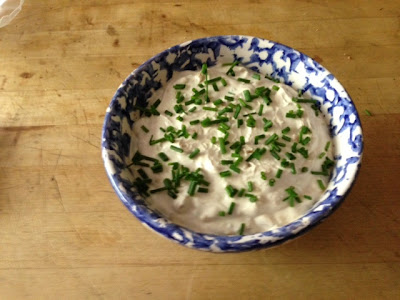 I thought this much dip would be enough for 10 folks, but it turns out only a few ate it. I would have been fine cutting the recipe in half.

Unfortunately for me, we have a bunch of chips and dip now hanging around the house - exactly what I don't need.

However, it is quick and easy and looks homemade, so if you're going to a shin-dig, you can pretend like you "made" it yourself and put some effort into the whole thing.

Garlic then chives. Is tomorrow's post going to be about shallots? :)

I would have ate the whole thing and not shared any. Oink oink oink

First garlic and then onion, I discern a theme.

Not a dip guy but it looks like something Spo would love. Nice presentation too.