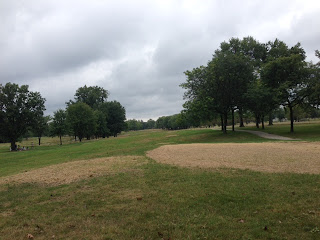 There is zero going on that is exciting.

That's not such a bad thing. As you read, the weekend was filled with yoga, and that was just frickin' great.  I cannot say enough good things about last Friday's nighttime yoga.  While I said it was 90 minutes, and was scheduled to be, I was corrected that it went on for 120 minutes.

It didn't feel like it - even though the instructor pushed me to my limits. I hope there are other events like this.  Mind you,  as we move into Autumn and Winter, something the size of over a thousand folks is slim to none.

The rest of the holiday weekend?  Eh - nothing too much.

Then there were the everyday living things, most of the time - yard, house, groceries and such. Labor Day just gave us an extra day to do such crud.

I will say, between bouts of rain, we did get out for some walking - some with Petey, some without.

Our big walk was going through the Acacia Reservation.  Petey had been before, but not this time. 710 had never been. Had we not been running errands, of course we would have had Petey take us on a walk. But this time it was just us - walking a few miles through the park that is going from golf course to nature preserve.

Oh don't worry - Petey got several walks during the day.  And that play with his brother the night before wore his beagle butt out anyways.

However, now it is only a four-day week, so we got that.