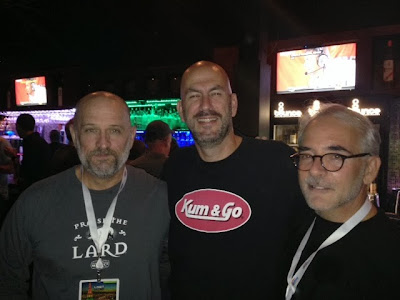 Joe.My.G-d. is up there with the pinnacle of gay bloggers - not that all my blogroll are homos (though most are!).

As I started blogging, with no direction (still don't have one!), my friend David G pointed me to JMG.

Joe's blog started my education about the blogroll process and how one can can time-sucked away by hitting those and then looking at those folks' blogrolls, then so on and so on, until you are somewhere deep, deep in the abyss.

Eventually, one learns what one likes to read and crafts their own list of where they visit daily, but it was definitely and education.

As I mention previously, I met Joe for a few seconds at the Dugout back in 2006, when I actually met David G there for a drink - not that Joe would remember.  I could not truly count that as meeting someone from my blogroll.  I think this time I can.

Joe was in town on a PR trip for the 2014 Gay Games. "They" shuttled him around all big Cleveland sites - museums, shops, popular sites.

As he does in many cities he visits, Joe has "meet-ups" for his readership. He had such a meet-up at Bounce,  a gay bar.

I haven't been to a gay bar since.....well........I don't know when.  And the meet-up was after, or close to, my bed time.  I vacillated about whether to go or not, since I was coming off a long and fun dinner with the cousins (possibly a post on that at another time - perhaps not!).  But I kept getting emails  and text messages from Birdie, pushing me to go meet both Joe and Father Tony.  She even talked me up to them.

My ego would say, "as if anyone need to talk me up!", but my reality is that even talking me up was a lost cause of people going, "who???".   Such is my self-esteem, or lack thereof.

As you can see, I went - and I met both Joe and Tony.  I texted the snap to Birdie, since I knew she was up and would want to see. Instant gratification takes too long. She wouldn't want to wait till today's blog post (which I'm writing after midnight in my darkened living area as the dog and cat sleep. I can hear their snoring but don't see them).

I can't say how many people show up to most of Joe's meet-ups, but there were only a handful of us. Maybe 5-7 that chatted with Joe (and Tony).

Tony recognized me from a few comments I left on JMG.  Joe did not seem to, but knew "of me" from Birdie - so my self-assessment of my self-esteem is still right on the mark.

Anyhooo - we had a nice conversation and we chatted some - some of it about Cleveland, some about NYC, some about - yes, you guessed it - Birdie.  She has a fan club, let me just tell you that.  No surprise to anyone.

But I got to meet two gay couples from the east side, one of them being "my age". They were nice gentlemen. Not that I can recall their names, but it's way way WAY past my bedtime.

I can't say I have missed gay bar life in the slightest.  I chatted with one out of towner, Brian, and that was ok, but so many others in the bar were sub sub sub par drag queens waiting for their "big shoe" (probably size 14).  I fully support the right to drag, but I don't get it - nor do I want to.

Normally that talk gets me skewered by the gay community, but I'll say this, all the guys I was sitting with in Joe's "VIP" section chimed in the same thought - I just had to say it first.

So Joe also took my pic, so I figure at some point in the next few days, I'll end up on his sight.  I can only hope he links me to drive traffic my way. ....though I'm not needing it lately.  Something has clearly happened in the last week.  I've jumped from my normal 300 readers per day to 700 to 1100.

....as for the title image, let's just go with I'm not happy with my Asian, half-asleep look.

I met Joe several years ago, in NYC.

This is so cool! I love that my blogger buddies are getting to meet. I wish so much I could have been there too. Aren't they a hoot, though? As are you—I knew you'd get along. :D

P.S. That's Tony's "Debbie Reynolds" smile. I'd recognize it anywhere. And YOUR smile reaches your eyes. It's lovely!

It's a pleasure meeting bloggers after knowing them as we do for such as long while.

Do y'all have Kum & Go's there? They're pretty much our version of Walgreen's here: one on every damn corner.