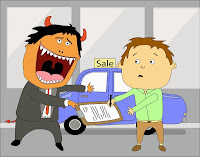 It's that time - shopping for cars.

I love it and I hate it.

I love it because, I've always been fond of automobiles. I was that kid who could tell you what ever car make and model was. I mean, not in that Marisa Tomei way, in My Cousin Vinnie.

Mind you, when I was a kid, there really weren't foreign car companies - at least that were prevalent. Sure, I knew MG and Jaguar, but other than that, it was the Big 3.  I had a fondness for Pontiac, Buick and well....if we have to go with Ford / Mercury, I focused only on Mustang and Cougars.

...and I've never lost my love for driving either. I like being in the car and doing the actual driving.

But I hate the buying process. I don't even want to test drive the fuckers, let alone walk in and deal with the SALESMAN (you have to scream that last word like Pee Wee).

I mean, I kind of swooned a bit over my last sales guy, but not so much with any of these.  And even the last guy, whom I did buy the car from, became a nuisance. Always friendly, but forever trying to get me to upsell to another car and stay in the Infiniti family.  It has only gotten worse as my lease is winding down.  Seriously - three to four calls per week and another two to three letters in the same time frame.

Even if I wanted another Infiniti, which I don't, they've done enough stalking to make me run in the other direction.

Yet, time is running out. I've put off the process as long as I could, but I've started looking and test driving cars - and building them, and others, on-line.

Hell, I'm leaning on getting a Kia, just because the dealer threw me the key and told me to bring it back shiny side up. What a joy not having to take a drive with a schmuck in the back seat, prattling on about "the features".

Most of the sales guys weren't horrid. Yeah, they have the same patter, the same crappy jokes. But there's always "the one".  Skeevy and at least one wants to know if I'm married.  Of course, they mean "to a woman".  I always throw them when I say I am, but to a man.  Sure, I could leave it at "yes, I am", but I don't.

Each time, they say "that's great!", and then jump right into a story about their girlfriend / fiancee. Calm down guys, you're safe. Not everyone wants you.

So, yeah, I've waited till the last possible minute (ok, a month), but I have it narrowed down, I think, to 5-6 possibilities. I'm thinking I'll narrow it down further by this weekend and then just make a selection.

Song by: Cyndi Lauper
Posted by Blobby at 12:06 AM

It's just a car until you picture yourself in it. Well, that's what I used to tell myself.

The youthful side of me still wants a muscle car. The practical side of me is saying, "It's okay. You CAN own a Subaru and no one will laugh at you."

I wear a pin every day that bears a cross framed in a rainbow. Several times men have taken note of the pin and almost immediately tell me something totally random that includes a mention of their wives. Took me a while to get it, but now I just give the Mona Lisa smile. Yeah, you're straight, I get it. Sheesh.

I've only bought two cars in my lifetime. My first was a gift from mom and dad: 1977 Datsun B210, used, with 100,000 miles on it ;-) I've driven each car well over 200,000 miles so far. HATE the buying process. The last one was particularly horrendous. Thinking about going to Carmax and just doing it that way this next time.

We bought a Hyundai Elantra about a year ago. First car we'd bought in more than a decade and first 'non-Honda' I'd owned since the mid 80's.

I can't decide who I hate more, car salespeople or lawyers.

I hate the process too; I bought Saturns mostly for the fixed price /no haggle element. I cowardly defer the buying process to others/do it for me.

Like you, I have always held a fascination with cars, and could tell when a car had replacement hubcaps rather than the originals that came on the car. But I've only ever purchased 1 brand new car from a dealership, partly because of the annoying salesmen, but mostly because of the depreciation that occurs the most you sign your name and the car is no longer brand new. My last 3 cars have been recent model used cars purchased from a friend's dealership. He doesn't bug me and I've been happy with all my purchases.

I'd rather have my teeth pulled. With no anesthetic. Through my anus.