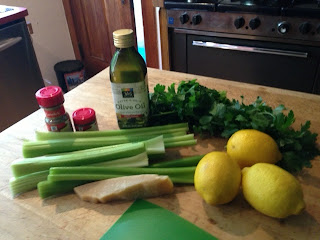 It's food, but I can't say it is "cooking".  A stove, oven, grill, campfire or microwave were not used in this process.

But we were having a family gathering and I knew I had to bring something. While I knew most would be bringing some prepared foods, and some their homemade stuff, I went with the latter.

I was actually testing out a new salad that I was planning on bringing to our neighborhood block party in a few weeks. I didn't think it would be bad, but why not use the family a guinea pigs?

I know I liked it.  They claimed to....and they are not ones to spare feelings.

The recipe was snagged from Ina Garten, the Barefoot Contessa - a celery salad.

I am not sure how many people like celery plain - I do.  But add peanut butter or cream cheese on it, and I'm fine with it as a snack. That can't be worse than potato chips, right?

But for a group, celery needs some jazzing up - and this is really done with the dressing you put on it - for the most part.

Here we go (in the image, I forgot to include the shallots or anchovy paste. oops:

DirectionsAt least 1 hour before you plan to serve the salad, whisk together the olive oil, lemon zest, 1/4 cup of lemon juice, the shallots, celery seed, celery salt, anchovy paste, 2 teaspoons salt, and 1 teaspoon pepper. Place the celery in a mixing bowl and toss it with the remaining 1 tablespoon of lemon juice and 1/2 teaspoon of salt. (Even though these ingredients are in the dressing, believe me-this step makes a difference.) Add enough dressing to moisten well. Cover and refrigerate for at least an hour to allow the celery to crisp and the flavors to develop.When ready to serve, arrange the celery on a platter, shave the Parmesan onto the celery with a vegetable peeler, then sprinkle with walnuts, parsley leaves, salt, and pepper and serve immediately

First off, the stated prep time of 15 minutes might be a little understatement. Chopping celery to get five cups is more time consuming than you might expect - and that's if one doesn't clean the celery, which I hope one would.

That said, with the cleaning, the chopping, the grating, the juicing and the whisking, you're probably closer to 25 minutes.

I skipped the walnuts, because, if you've been paying attention, unless it's cashew chicken, nuts should not be in food.  ....at least that is my rule, when making or eating.

Maybe it was the lemons I purchased, but I only needed one and a half to get the juice needed.

Anyways, the recipe is a keeper. It might be better for warmer weather eats, but it is fairly easy and serves up to six (probably more). 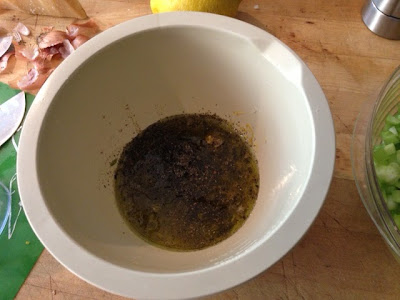 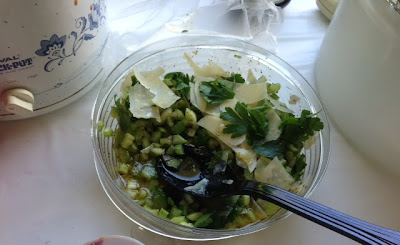 the kind of finished product.  I forgot to take a snap until people already started digging in.