My Name is Joe 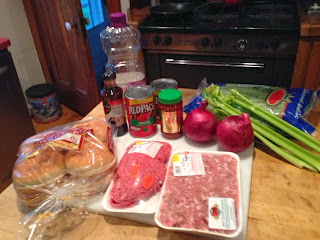 I was fixing to do something new for dinner last night, but you know, figuring what to cook is 85% of the battle.

I don't care that about shopping, prepping, cooking or clean-up.  I just want something interesting to make / eat and hopefully that it is fairly easy to do - but I also don't mind a challenge.

Asian Sloppy Joes didn't seem like anything that would tax my pea-sized brain too hard. As I do often, I stole it from Bo and his blog - which unfortunately seems static these days. I'm not liking that.

I actually paged through a number of his posts trying to find something I'd want to make (sorry, but the man uses a lot of beans in his dish - and I just can't do that). There were a few dishes I have slotted for later dates, but today I'm just taking it somewhat easy.

So Asian Sloppy Joes it is.  Or Asian Sroppy Joes, I suppose.

Oh, don't judge me.  It's just supposed to be a little funny.

I'll let you go to Bo's blog to get the actual recipe. It looks like a lot of stuff atop, but it really isn't. The prep is easy, the clean-up is too.

Mistakes, I made a few - and while the end-result might have tasted different from Bo's version, 710 and I really liked how mine turned-out.

Let's start with that I misread the instructions and used a teaspoon of sambal oelek, when I should have used a tablespoon.  Deep down I knew it didn't look like enough, but I didn't go back to double check. Pooh. I think more sambal oelek would have made my concoction even better.

I'm guessing if there were a tablespoon of it in there, you'd see it in the picture. 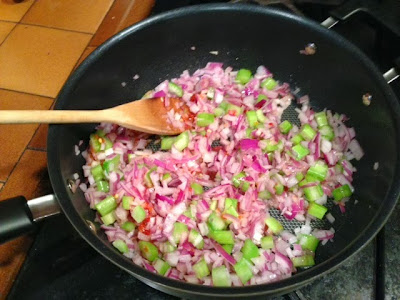 Then I was short a half-cup of hoisin sauce, I didn't check how much I actually had, but I figured I had to have enough - right????   Anyway, I added more chopped tomatoes thinking it would equal out the liquid-y effect.  I don't know if it did or didn't, but it seemed to turned out ok. 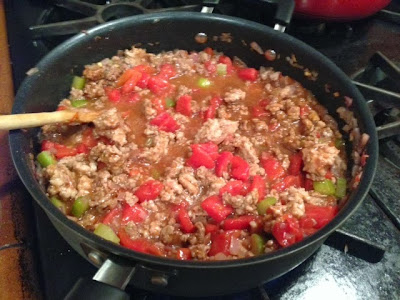 Don't worry - this isn't the final product. This still needed to simmer and thicken for 30-35 minutes. 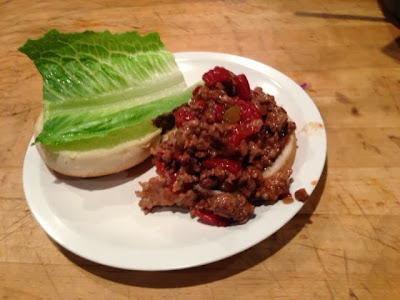 This is the final product. Yes, the meat is spilling over the bun (story of my life! .....ha! just got that taken care of before anyone else tried),

I also didn't use iceberg lettuce, because we just don't buy or use iceberg on anything. I used romaine, but I totally get why it is called for here. It's like lettuce wraps at BD Wongs PF Changs. The crispness offsets the warm innards.  It works.

And it is sloppy. Yes, we used buns, but we ended up using forks, but maybe because we overloaded them.  And yes, I had a second one (hey, I was hungry!), so I used less filling and the bun totally held up.

But the taste was great. It had familiar elements, but a much much better flavor than what we grew up with - and my mother never used Manwich, but with most of them, there isn't a great degree of variation.  This has enough that it makes it worthwhile.

This serves 6-8....and three of them are gone. But we have lunches for the next day or so.  For the leftovers, I will add more of the chili paste to see how that goes.

But I would definitely do this again. It will be great on a cold winter's day.

Song by: Lucy Kaplansky
Posted by Blobby at 12:05 AM

we have sloppy joes frequently ; they make for a easy but various dish, indeed.

Is sambal oelek something you are spelling backwards like Morty does?

Sounds delicious and easy, a winning combo in my book.