A Trick of the Tail

It was our, what is turning into, monthly visit to the vet.  Poor doggie.

This time, he still has allergic hot spots, but it was also his annual shots and blood work so, we combined the trip.  The old man is off anything that has beef or chicken products or by-products in it - so we tossed some of his treats and he's now on hypoallergenic treats along with his salmon and sweet potato food.

But his itching has seemed to decrease in the last few days, so his cone is off and he's a happier puppy and I'm a happier dad. 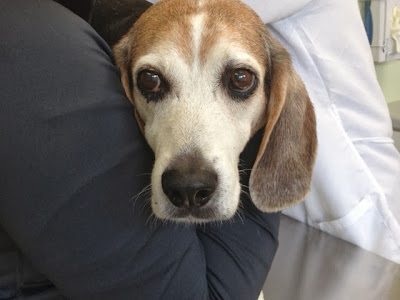 I know I have no perspective, but isn't that the saddest, yet cutest, face you've ever seen?  He was getting his nails clipped. I'd have done it but one of his hot spots is on a paw. I was calming his down as he was being held and clipped. 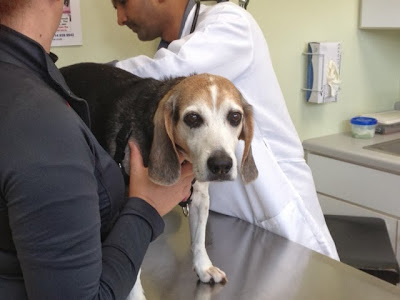 He really is a good boy for the vet tech and the doc.  And he doesn't hold it against me that I take him there so often.  The one vet tech who adores Petey wasn't there that day and called the next to tell me she was sorry to have missed him.  THAT is how good of a dog he is.

Well, I had a Vine video that I shot (that was to tie into the title, but I'm too lazy to change it now), but it doesn't seem to be uploading.  Maybe I can get that to work for next week, but as it stands, I am dead tired and had a few drinks, so I'm wrapping this up, getting dessert and going to bed.

awwwwwwwww, poor puppy! they can melt the coldest of hearts with just one look. hope petey feels better soon.

Petey is so cute. I have a lot of experience with dog allergies. The first thing the vet should do is give a shot of steroids. If there is immediate improvement (within an hour) that indicates it’s a pollen allergy (seasonal allergy) and not a food allergy. Most dogs (especially terriors and beagles) develop season allergies as they age.

No need for Petey to milk one's sympathy. The doleful expression on face attracts it by the bucketload.

Who's a good boy!

Our pup has been on allergy meds since the beginning of time. Zyrtec is the simplest to use: one pill a day. She eats it with her kibble. She's allergic to so many foods that she gets only (corn-free, wheat-free) kibble to eat. No treats except more kibble. She seems to be cool with it.

Sad dog faces are their most barbarous weapon and it always works.

We had a beagle who also had hot spots from time to time. Felt so bad for her! I've heard that Gold Bond powder helps.