Song of the Patriot 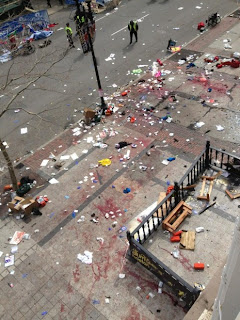 It's amazing what 12 years does and does not do.

With the tragedy at the Boston Marathon yesterday, I had all these feelings of helplessness, vulnerability, sick voyeuristic tendencies, and news trolling, along with a sort of sickening guilt for all of it.

The change is how things are communicated that didn't happen with 9/11 - texts, tweets and Facebook updates.

What kills me with those were the people either oblivious to event or insensitive.  People still sending pictures of food they've eaten or cat videos perplexed me.

At least with 9/11 you only had news websites and inaccurate traditional newcasts.  Now you have information and misinformation streaming at you from all sides.  It's unbearable.

The odd thing was, for hours after the event, I hadn't even turned on the TV, which was the main source of information in 2001. It's been laptop and phone for hours.  It is not that a television isn't handy, it's just that back then, I remember not wanting to watch, but not able to peel myself away from it that September day - and the following days afterwards.

I can't do that again. It is not that I don't feel for the injured, the runners, the families, or the town of Boston.  I totally do. But the spectacle broadcasters, bloggers and tweeters will put on for the next few days is and will be unconscionable.

Of course, early on in yesterday's horror, someone said it might be terrorism.  No fucking shit!

Yes, I suppose some faulty electrical lines could have exploded, but not two in 10 seconds.  And when isn't an explosion at a major event not considered terror?

No, what "they" meant was, some non-white, non-American folks were "probably" behind it. Sometimes it was said, sometimes implied.  Because if history has taught us anything it is that Timothy McVeigh was a Muslim or Arabic.

Guess what - it they might be, but they might not. We have enough hate from our own citizens, but somehow we think our shit don't stink in that area and that is must be someone from or with ties to the mid-east.  I don't jump to that conclusion.

That this happend the same week in history as Waco, Oklahoma City and Colombine isn't lost on me. I would not shock me for a moment to know there are ties to it.

I so hate the news cycle. They have to fill the void, so they just speculate and then the haters hate - hell most still think Iraq was behind 9/11.

The days of Frank Reynolds snapping at unknown staffers back in 1981, when Reagan was shot, yelling,  "Let's get it nailed down...somebody...let's find out! Let's get it straight so we can report this thing accurately!" are gone.

Facts mean little or nothing in this environment. It's about keeping the fear alive so people stay tuned in.  They can spin it any way they want, but it's all about ratings.

What happened in Boston as horrible and sickening. The image I put up at the title is on purpose - to leave an impression of how bad it was.  And trust me, that is a tame picture compared to what is floating around on-line.

The chaos, the blood, the aftermath should not be forgotten.  It should be used for memorial and education - not for media hype.

Yesterday was Patriot's Day in Boston.  What won't be forgotten are the people who ran into harm's way to help. I'm not talking firefighters and cops. I'm talking runners, spectators, shop keepers - all of them.

Song by: Johnny Cash & Marty Robbins
Posted by Blobby at 12:16 AM

an event like this is only 1 of 920384756 reasons I don't watch tv, have a twitter/facebook account, stream the net. TOO MUCH FUCKING RATINGS HYPE.

to the media: if you don't have accurate facts, STFU until you do.

I've gone off TV and mainstream news for the last few years. It's a bunch of blather as far as I'm concerned.
FB and Twitter and whatever else are just a bunch of extra noise.

I have no words adequate to describe yesterday's horrible tragedy.

I watched more than I wanted to, didn't have much of a choice, and George and Diane should be fired for asking the dumbest questions. STFU should have been screamed at them. What I have always hated about the news is that 80% of it is really reporting just how much they don't know.

I agree 99.9% with all of you. What I don't agree with is that this was a tragedy. Tragedies are Katrina, the tsunami, things that occur in nature, without the hand of man behind them. Until proven otherwise, this certainly looks to have been man-made, and it is disgusting, revolting and horrific. Why some evil people want to kill and terrorize other human beings is beyond me. I pray for the victims.

A sad day indeed. Violence is everywhere as it's always been. Humans suck.

What happened yesterday was so tragic. Hope that people will share information more correctly and precisely so as not to avoid misconception and hurtful judgment.