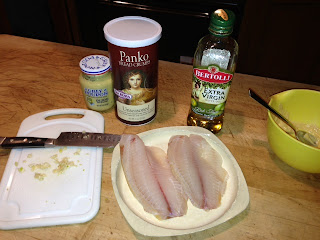 I've been playing around with this recipe for a few weeks now and while I might not have nailed it yet, I'm closer and closer.

I'm open to suggestions or variations, if anyone has any bright ideas.

Fish - it's what's for dinner.

I try to keep it simple, as it is such a quick thing to actually cook, I don't want that much more prep time to be involved.  I like to cook, but sometimes I wanna be a lazy one.

You can see the ingredients:  tilapia, Dijon mustard, garlic, Panko and olive oil.  Boom - that's it.

I made a garlic-mustard "glaze"(?)  to go over the patted-dry tilapia.  The measurements this time weren't measured out like last.  I'd say it was a 1.5 tablespoons of mustard and about two cloves of minced garlic.  Last time I used just that, but it didn't coat quite as nicely as this time.  For this last time, I added a very little bit of olive oil to cut the mustard a bit - and it seemed to work.

Then I just coated the fish on both sides. 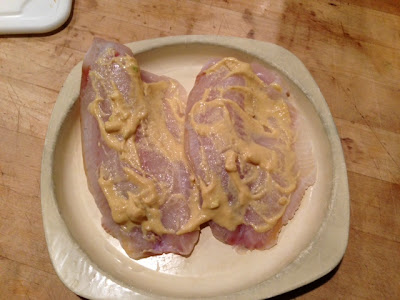 Ditto with the Panko. 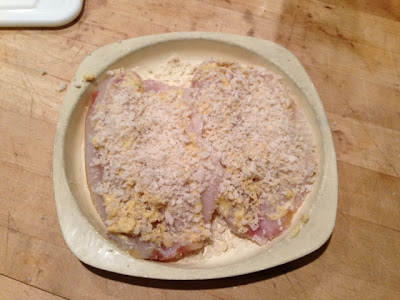 Last time I didn't use Panko at all and the fish cooked much faster - like 3 minutes on each side.  This time it took a little longer. 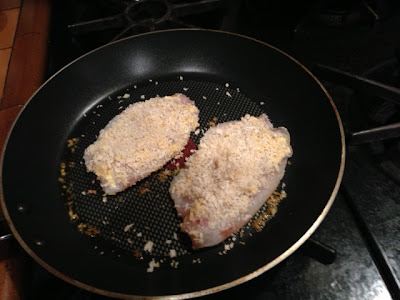 710 thinks this all might have worked better had I baked the fish as opposed to using a saute pan.  Perhaps he is correct, but at this point, I had not preheated the oven.  Don't get me wrong, he didn't dislike the outcome - but I'm guessing Panko encrusted anything probably is more for baking than "frying".   (our oven, as much of a behemoth as it is, has no broiler, so that is out of the equation.)

But the finished dish looks pretty - no? 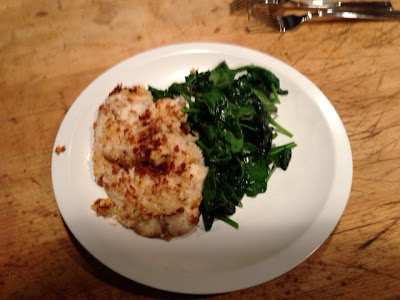 I get that I'm not a food photographer, but it doesn't look heinous or anything - right?   RIGHT?

As the side, I just wilted some spinach with a little olive oil and about two cloves of minced garlic. I liked it - but it turns out 710 wasn't big on that at all.  He likes spinach enough, just not prepared that way.

Well, live and learn.  I mean, it's only been 28 years - we're still learning each others likes and dislikes, right?  {sigh}

Prep time definitely takes longer than cook time, but for both fish and spinach, we're talking 7-8 minutes to cook.  Peeling and mincing the garlic took that long!

Clean-up is a breeze too - and let's face it, when contemplating dinner, that can be a big factor in your food selection choices.

But the mustard gave the fish good taste and, to me, it wasn't overpowering.  White fish is pretty fucking bland, so you have to do something.

Will it be a staple?  I dunno.  We need to eat more fish, so anyway I can find to make it interesting is alright by me.   But again, I'm open to suggestions - but not criticism.

do you guys have a toaster oven? we have one and use it for baking. of course, ours is big enough and is also a convection oven/broiler. beats heating up the big one in the summer!

Instead of baking or deep frying, recently I have started pan frying fish fillets.

Using my Circulon pan over medium heat, I add olive oil and a tablespoon of butter. When that is all melted and mixed, I add the fish, skin side down. Then I sprinkle McCormick lemon pepper and McCormick herbs de provence liberally over the fish. After about 3 minutes, I turn it over and sprinkle the above seasonings on the skin side cooking about another 3 minutes or so depending on the thickness of the fillet. Finally, I turn it back over to skin side down for a minute or so before plating it. So simple and so good!

I agree - fish is rather bland and needs to be seasoned. Your recipe sounds tasty and easy - a great combo!

Looks interesting, I will try. My quick and easy fish recipe is you mix mayonnaise and dill pickle juice (from the jar of pickles) and then coat the fish and bake. It come out like the fish is infused with tartar sauce already. Tasty.

Looks pretty yummy to me. We're deinitely fish eaters though Harper's Other Dad is not a tilapia fan. I'll try it this way and see if it changes his opinion

It does look yummy. And I guess because of the mustard you used.