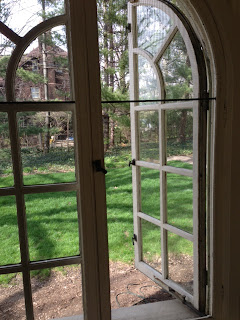 What a horribly shiteous "Spring".

Yes, Spring is in quotes, or if you were in front of me, air-quotes.

Two days ago, I took Petey for a walk in the woods and it was 78 degrees!  Granted, even for us, that's a little warm this time of year, but you know with Climate Change, I'll take it.

We've gone back and forth on the warm or warmish weather, only to have it plummet back into using the electric blanket temps.

Yes, it was 78 on Tuesday.  I went as far as to come home and take the storm window off one of the sunroom windows so we could get some fresh air.

Yesterday, when walking Petey, I was halfway through when it started to rain - April showers and all - but then realized I should have had a hat and gloves.

I hate to say it but it was our only walk for the day.  The rest of the times it was just out in the yard for #1 and #2.  I can almost take the cold and snow more than the above freezing and rain.  That is just chill to the bone cold.

Even afterwards, I came home, there was no warming up - so I took a very hot shower. When 710 called on his way home from work he said it was snowing.  SNOWING!

This is not unprecedented.  Maybe eight years ago on 4/24 (I know this because it's my niece's bday) we must have got a foot of heavy wet snow.  My parents were in Florida  - I know this because the weight of the snow snapped 10 of their 14 arborvitae.  Those things were 20-25 feet high and effectively blocked the neighbors.

Had my parents been home, no doubt my mother would have been out there knocking snow off with a broom or something.  But it was doomed.

I do not foresee getting any accumulation tonight.

On another note - kind of - Petey and I were down in the ravine Tuesday and I stopped to take a video of a waterfall we had come across.  I've been down there plenty of times, but clearly not at this part, or I would have noticed the water feature.


What is odd is I sent it to 710 and he said he took the exact same one a few days before, including the panning to and from Petey.

These weather extremes can be so frustrating.

We were down to a high of just 90 today after hitting 94 earlier in the week - insane!