I Love You, Goodbye 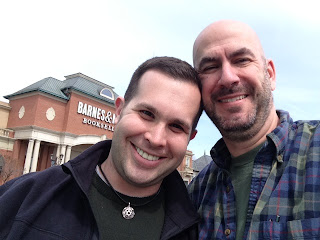 It's so sad when friends leave.

Yes, I know I wrote about Jeremy moving from Cleveland just over a year ago, but that ended up being a false alarm.

This time:  not so much. He has a job, he has a new place picked out and his apartment and the moving company is scheduled to arrive.

This post isn't that much different than the one a year before.  Jeremy is still Jeremy - wildly inappropriate, which is one of the reasons we get along so well.

True, he is young - turning 34 next week.  Too young for me to do most things with, as I don't go out to clubs all night (or at ever!) and while I met some of his friends, I am sure they were thinking 'who's the dad?'.

Still, I became one of the few people in Cleveland he bonded with.  I'm sure the oldest. But between his travel and mine, we never had enough time together, yet when we did, we made it count.

...and there is always phone calls, texting and Facebook.  He'd sort of be outrageous there, but you know, I couldn't respond the way I'd like, as his mother (!) follows him in FB....though I don't think he tones it down for her sake.  I do - and I've never met the woman.

So no false alarm this time.  His moving truck comes next week. He's gone two days after that - Atlanta bound.  Of course, one of the towns to which I never go.

We had our "goodbye" lunch yesterday.  Oh, the poor people sitting next to us.  We weren't loud, but you do sit closely with others, so there was no way of not overhearing some things.  At one point the two people got up and left, but it turns out they just went up to the pickle bar.

I'm sure I'll talk with him before he takes that midnight drive to Georgia (whoo-whoo!), but it is doubtful I will be seeing him before he departs.

Perhaps I will see him again, but hopefully not because I have to be in Atlanta.  We'll have to find another way.

Yet, I wish him well.  While I won't say what organization he will be joining, it sounds interesting and challenging.   ...and it will prove to have some hilarious and most likely unrepeatable stories.

Song by: Thomas Dolby
Posted by Blobby at 12:49 AM

The pickle bar? No kidding?

These are sad tales , indeed. The hope things will stay connected, but often we know they will not, alas.

perhaps pick a halfway point to meet, like memphis or louisville, in the future?

Look out Atlanta! Cute pic and now you have a reason to go to Hotlanta!

What kind of establishment has a pickle bar? And how many different types of pickles are there?