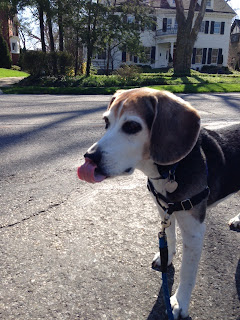 Our boy is growing up.  Or old. Or both.

If Petey were human, he'd be a tween and starting to buy Taylor Swift downloads and posters for his room. But since he's a dog and 11 in our years yesterday, it is more like 77 for him.  So in theory, he'd be on Medicare Parts B and D.

The title image is his official birthday portrait.

It is quite amazing how he won't look at the camera, almost on purpose.  Getting this dog to pose is impossible.

Lately on walks, he's more like Ferdinand the Bull. He'd rather just sit in ground cover and smell the ivy.  Personally, I think it is because on those nice days, we've taken longer walks and he's tuckered out so sniffing is an excuse to rest.   I'm good with it.

But yeah, Petey turned 11 years old yesterday. He actually got more hugs, pets and kisses than normal - which is saying something.  He's a very loved and pampered dog family member.

I laid eyes upon him the first weekend my sister brought him home - she brought him to another sister's house to show off.  I was down with that - since playing with a dog is better than interacting with some of my family.

My one sister had a pool, but it turns out, Petey was not much for water. He can swim, but would rather not. But I can't say I didn't try. He looked very distressed, though I was with him every millimeter of the way.

It is amazing how his face changed over the years.  These were the first two pictures I took of our little man:

How fucking adorable is he?  The question is rhetorical.

Here he is at poolside.  Scary how much he's grown. Katie too. She graduates college in two weeks!

But Petey's slightly white snout turned to mostly white as he grew into it, even beyond the eyes - and the black and brown receded somewhat.  His black ears became mostly brown.  And of course, now the top of his head is greying - just like his two dads.

Well, my beard is greying - the top of my head?  Not so much. 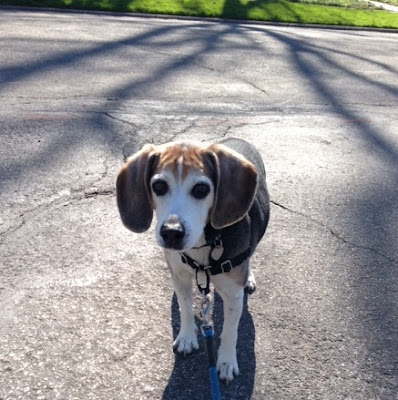 His nose is great and same with those hound dog eyes, but his whimsy might actually be in his ears.

These are what I call his 'formal' ears - when they are at attention instead of down and more droopy.

He's a good boy, and we're very happy to have him.  710 thinks he's my dog, but he totally isn't.  He pays attention to us equally and vice versa.

Song by:  Bruce Springsteen
Posted by Blobby at 12:13 AM

happy birthday to a loveable puppy. I don't recall seeing those younger dog days pix. congrats to your niece too!

we all gettin' old, but we don't have to show/look/feel it!

Such a winning face! Anyone who does NOT fall for him is no friend of mine.

What an adorable pup you were and still are!

He still looks so charming even after all those years. Happy birthday Petey!

Many happy returns to Petey the best of pooches.

Belated happy birthday to Petey! And for such a loving family(s) to take care of him.