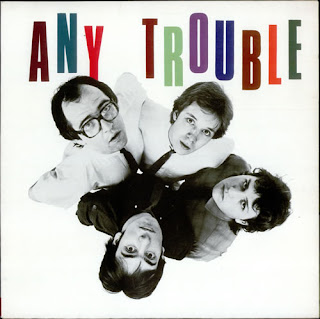 In the late '70s and early '80's, Stiff Records was hitting it out of the park with their roster of new wave acts - some of whom made it, some not so much.   Lene Lovich, Ian Dury, Rachel Sweet, Elvis Costello, Dave Edmunds, Nick Lowe and more.....

Another group - much lesser known - was Any Trouble.  They had a really good debut back in 1980, Where Are All the Nice Girls?

I'd be shocked - shocked I tellz ya - if any of my readers had this album, let alone heard of the group at all.  No worries, they were a blip, two or maybe three records in succession.  Crank 'em out and fade away.  Though the team-lead, Clive Gregson still makes appearances now and again (at least in Cleveland) singing some of the band's material.  He did write most of it.

But Any Trouble is pure pop and not so much new wave.  But their first side of their first album is pretty perfect if you like pure pop.  There is no edge the music - lyrics might be "darker' but their off-set by the guitars and bass line.

My absolute favourite song on the disk is "No Idea" (embedded below), but "Second Choice", "Foolish Pride", "Playing Bogart" and "Turning Up the Heat" are all solid.

Actually if it were just an EP, which was kind of the style at the time, it would have been a perfect disk.  The second side is ok, but never the bigger draw. I was never a huge fan of "The Hurt" or "Romance". And side 2 ends with a shitty cover of Springsteen's "Growing Up.

I guess what surprises me more is that both iTunes and amazon .mp3 store carry it.  I mean, it doesn't cost them anything, I'm just surprised anyone converted the songs to digital for potential purchase.

Still, it's fun revisiting the musical past.  At least sometimes.