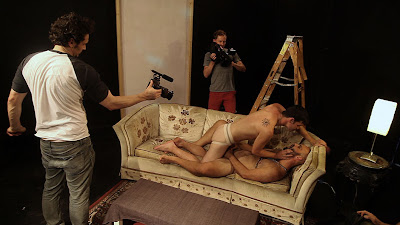 The second of our Cleveland International Film Festival movies was even gayer than the first - hard as that might be to believe.

Last year, James Franco worked on a film that was to recreate a 40 minute segment of the controversial 1980 movie, Cruising. That film depicted hard core S&M scenes, that were eventually cut by the ratings board.  However, even back in that day, what was left was still too controversial.

At the age of 16, I was working at a grocery store when Cruising came out.  How do I remember this?  Because Mike G, a butcher at the same store, was hanging with me while I loaded cars full of food.  He told me in detail about how his girlfriend's parents saw the movie and then described the naughty scenes to me.

I'm not sure why Franco opted to make Interior. Leather Bar. While asked during the movie, he didn't really have a reason, not a truly viable one anyways,

The movie is ok, but that's about it.  It won't make a dime.

Oddly, the only parts that were well done were the x-rated like parts. And by that I mean, they were well filmed and well edited.

Franco, by the way, is in the movie, but he's not in the movie within a movie - so if you're looking to see him in leather or having sex, save your $$$ or see him in Broken Tower, where he allegedly fellates a prosthetic penis.

As you can see from the title image, Franco actually films some of the sex scenes (which are fairly minimal) and you just know he took the tape back to his hotel for a wank.  I like the man, and I really don't care, but seriously, when is he coming out?  Just do it already.

No 60 minute movie is not worth $14 per ticket - and that includes this one. But it is the only way the film will make it to a theater in Cleveland.

Song by:  Michael Nesmith
Posted by Blobby at 12:21 AM

Email ThisBlogThis!Share to TwitterShare to FacebookShare to Pinterest
Labels: Movie

I thought that was you on the couch at first. ;)

I was just old enough to have seen Cruising in the theater. I was a college kid, still totally in denial and went alone. I recall there were not many people in the theater.

I was not aware of the Franco riff on it. I can't say I have any great interest in seeing it but I am intrigued to know why he did it.

Is the hottie on his back on the couch in it a lot? I'd watch it for that?