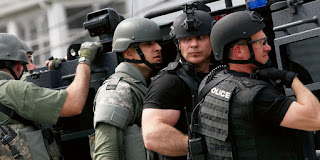 In a way it seems like the post-Boston Marathon events took forever to come to an end since its beginning on Monday.  On the other hand, had those kids made it out of Boston, it could have gone on for months.

I know folks rooted for both suspects to die, but if this kid survives, I'm glad about that.  Not necessarily because he'll rot in prison, but maybe, just maybe, there will be some explanation as to why.

For it all to be finished in a hail of gunfire, with nothing but death and no rationale - whatever that could possibly be - would seem crueler than just ending the stand-off with no answers.

There is no good outcome. None.  But it's over....except for the media aftermath...which could take weeks.

The only thing worse this week (possibly) was the Congresses inability to act on any gun control laws. Spineless wimps.  The criticism they've gotten this week is weak in itself. None of it sinks in, none of it matters - and it is just so fucking sad.

It's exhausting. This whole week has just been draining.

I'm glad it's over - but probably not as much as John, BosGuy and Mike.

Email ThisBlogThis!Share to TwitterShare to FacebookShare to Pinterest
Labels: Crime

Personally, I think these two were put up to this. At least there's a chance of finding out with one of them still alive.

Note to Boston: A blood hound would have easily tracked and located a bleeding person fleeing on foot within 30 minutes. No need to lock an entire town down when one dog could have easily solved all your problems.

I've been struck at how TRAGIC this has been for Americans when our military visits such horror regularly on people around the world. On April 7, US led airstrikes killed 20 in Afghanistan, 11 of whom were children.

Perspective is something Americans seem to lack. Tragedy is tragedy, but the incessant navel-gazing makes me ill. Just sayin.