Born Under Punches (the Heat Goes On) 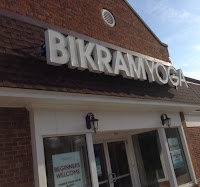 It seems there is a lot I don't know about yoga.

I asked my cousin to join me in going to a Bikram Yoga class.  Like a stand-up guy, he agreed.

I assumed Bikram was just a formalized way of saying "hot yoga", but it is not.  The practice is quite different than Power or Vinyasa.  Sure the room is heated to 105 (!!!) fucking degrees - or hotter in this case - but I thought that was just to make your muscles more bendy.

IF my muscles got that bendy, it was never realized.

I read the prep material before going:  get there early for first timers to acclimate to the room (done). Bring a towel to go over your mat (done).  Push fluids - up to four liters of water before (umm...not quite done.)  The class started at 09:30.  I can't drink that much water by that time, even though I was up at 06:00.  I got maybe two in.  I drank a lot the night before too, but you know, in the middle of the night it was an Austin Powers / Evacuation Complete outtake scene.

Before going in, a woman told me this would be nothing like I ever experienced. This was not a lie.

I strategically placed us near the door, in case one of us had to leave.  They HIGHLY discourage people leaving in the middle of class.  Oh, did I mention this was 105 degrees......for a 90 minute class??

Clearly, by the time we even started the class, I was breaking a sweat.  Before we were done with a beginning breathing exercise, we were both drenched in sweat.  My light grey sweat-wicking shirt was starting to turn dark grey.  To our credit, David and I actually had shirts on.  Many men there practice without - but it was my first time and I wasn't going there. I'm not sure it would have made any difference except that people could mock what was previously hidden.

Oh yes, you do this in front of mirrors.  Don't need that staring back at me.

Now, in the last few years, you've heard me say here, that I used to never sweat - and those days have long past, especially after starting spinning.  But I remained steadfast that I don't stink when I work out / sweat. And you know I don't wear or own deodorant.  Since I don't (think I) smell, why clog my pores?

However, I happen know that during male-to-male relations, there are a certain faction of guys who like a certain funk on guys.  I can't say I'm truly one of them, but if someone did like that - they could have made it over to me 20 minutes into the class.  I fucking stank.  Oh - it was so not pretty.

As for the class itself, the poses were a little different than normal yoga.  There is no down or up dog. There is no pigeon or balancing half-moon.  And there is definitely no child's pose.

The Bikram poses weren't really any more difficult than in a Vinyasa class, it is just that you had to do them in the heat.  While we don't normally do a Rabbit, Tortoise or Camel (yes, it sounds like a Chinese new year schedule) poses in our regular class, they're not unheard of.

The challenge was either how to grasp a body part you couldn't possibly hold onto because of the sweat, or bending over backwards.  A few times doing the latter I'm thinking, between the heat and the position - 'this is it, I'm gonna pass out'.  Then I'd just sit while everyone else did their thing and try to sip my water. Taking big drinks didn't seem possible.  Pouring it over my head seemed impractical, as it was now just hot water.

At one point I looked over to David and started to jokingly (?) say, "I hate you...." but realizing going to this class was my idea, I changed "you" to "me".  He was too involved in not passing out himself to even hear me.

When done with the class, the five newbies (us included) got a round of applause from the regulars.

Afterwards, most of them went onto tell us how much hotter it was in there than normal and how much more difficult of a class it had been - even for them.  At first, we thought they were just bullshitting us being nice, but it came from too many folks. One guy said it was 5 degrees hotter than normal - but it was a huge difference. 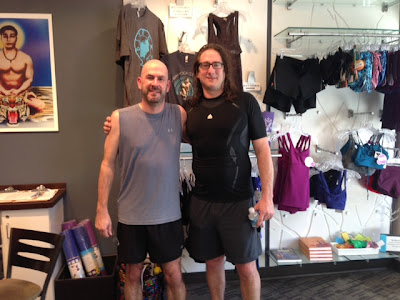 We walked out to get tea in just our workout gear and the relief of the cooler air felt great........for about 47 seconds....then we were freezing.  For the next few hours, I couldn't regulate my body temperature. The hot shower felt great, then I got out and would sweat and freeze within a few minutes time. If I put on a shirt I would get too frickin' hot. All the while drinking drinking drinking.  ...and yes, all of it water.

The towel I brought to cover my mat now weighed 22 pounds.  Everything ended up in the trunk as it would have made the car so stinky.  And everything went right into the washer, as it just couldn't sit around in a bin for a few days.    and yes, I went right into the shower once I got home.  No way 710 was gonna let me sit around smelling like that.

Would I do it again?   hmmm.......I dunno. David said we could check it off our bucket list, but I didn't realize he's been a few times with his brother-in-law. I might do it again, but I won't become a convert or regular to this style of yoga.

If nothing else, it prepped me for what it might feel like in Hell.  I should go more, just to get used to eternity.

interesting...but not for me. I would think all that heat would provoke an asthma attack in me. I'll pass; see you in hell (if there IS such a place - doubtful).

Amazingly (or not), I just saw a television program where the guy did this kind of yoga-in-the-heat in Lebanon. I'd never heard of it before and now, twice in one week. Oh, and the guy's a French guy who does this series going around the world experiencing massages, saunas, exercises, and other stuff geared to making people happy. He took off his shirt pretty quickly into the yoga session. He also ended up taking off his shorts and finished in his underwear. It helped that he has zero (and I mean zero) body fat. Oh... excuse me... where am I?

Tried that heated yoga once years ago. Thought i was gonna pass out. I did last the entire 90 minutes but never went back. Have been doing " regular" yoga for a few years now and would rather swat because the intensity of my workout, not because sonebody cranked up the thermostat.

You had me at the title. I love that song.

Curiosity about this statement: "And you know I don't wear or own deodorant." Have you always not? Or is is something you stopped doing later in life?