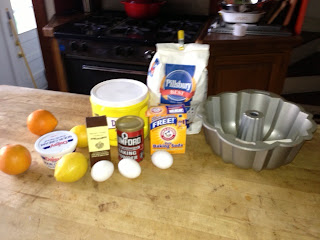 Another birthday.  Another opportunity for me to fuck up in the baking department.

As much as I know I am my father's son, when it comes to baking, I am my mother's son.

My mom is a good enough cook, but I'm telling no lies out of school when I say she can't bake to save her life. She knows this too, so if she ever stumbled upon this blog I don't think she'd be offended by that comment.

But almost every year, I attempt  - and that is an understatement - to bake 710 a cake for his birthday.

Unlike cooking, baking is more of an exact science.  To follow a recipe and not be distracted is kind of key.  When it comes to baking, I don't have that commitment to detail.

Yet here it is, another year and another opportunity / challenge.  I went with an orange cake, infused with an orange / lemon syrup.  And for good measure, I also made an orange glaze.


It's a messy endeavor. There's a lot of mess.  I find that of most baking. Too many steps and too little pay off.

I did take pictures, of course.   The title image has all the ingredients, well except I forgot to pull out the confectioner's sugar for the pic. Oops.  It doesn't look like a lot is involved, but it is. 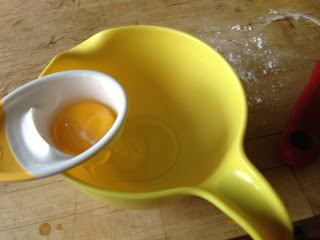 Egg Whites to mix for stiff peaks.  But look at my cool Oxo egg separator.  Honestly, it looks cool.  Separating by hand is still easier. 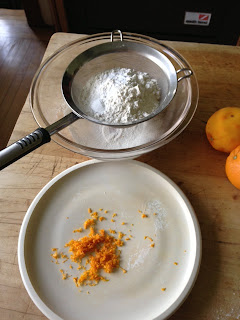 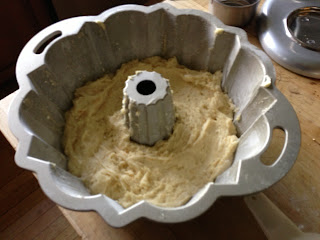 I didn't take pics of me mixing the butter, sugar, eggs, egg whites, sour cream and flour.  But here's a key tip, don't take a call in the middle of it all and forget to switch from the whisk attachment to the paddle attachment.  Maybe it's not important, but perhaps, maybe it is. 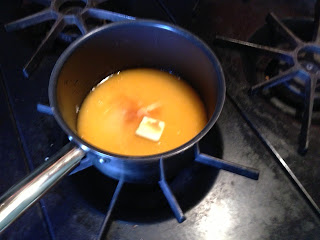 While the cake baked, I made the syrup to infuse into the bundt. This was the easiest part of the process, though it took more than two oranges to get the 3/4 cup needed.  Just an FYI. 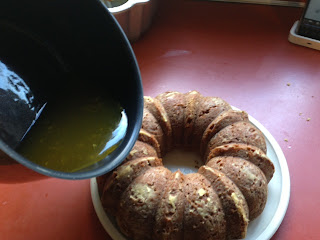 No way around this - it's sticky and messy. 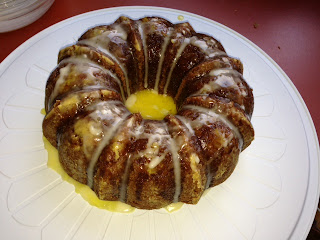 I also didm't take pics of me making the 'glaze'.  It wasn't part of the recipe, just more sugar and orange.  2 cups of confectioner's sugar and 1/4 cup of freshly squeezed orange juice.  Don't put it one if the cake is too warm....it just absorbs

I'll be honest, the cake ended up looking good and tasting good.  That whisk / paddle debacle didn't really seem to matter.  The cake was good.  The citrus flavour was good but not overwhelming.

It is a little labour intensive, but it's a pretty good cake.

Looks absolutely delicious, and I believe you when you say it tasted good as well.

Baking is an ordeal. The sure way to tell I have been baking, is the amount of flour all over me!

We have discovered that my adult son, who lives with me, has celiac disease. So now everything has to be gluten free. And that becomes a real problem when baking. My son loves pizza and would make homemade pizza every Friday night. Last week was a total disaster, as we used Bisquick gluten-free flour. It tasted like pizza on a pancake. Awful, we threw most of it away.
Tonight was somewhat more successful using Bob's Red Mill Pizza mix which even includes the yeast. It was not the best pizza I have ever eaten, but at least it did taste like pizza and the crust was passable. We'll try to tweak it further in the coming weeks.

I LOVE to bake! BUT there would be some mods to the recipe, e.g., I do not have a kitchenaid mixer, no eggs would be separated, nothing would be sifted.

I tend to take the bullshit out of recipes (most of them are full of it). and I wonder what would happen if I poured the orange sauce over the cake whilst it is still in the pan, thus preventing a sticky mess.

I admire you baking.