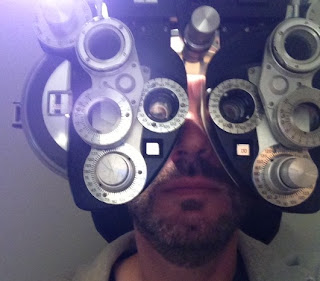 First off, I SMS'd this picture to 710 yesterday with a reference about the Borg Collective.  His almost immediate response was:  "are you trying out material for your blog?"

Yes. Yes I was - and seemingly it is playing in Peoria, so it's ready for PrimeTime.

The last guy I went to - who not so surprisingly is the same doc my cousin went to - drained every ounce of joy and life out of me by the time the exam was done.

He's like a Dementor, but with a medical license.......and without the whimsy.  I vowed never to go back to him again.

I did find a great doc, purely by chance, as my vision plan limits where I can go.  I opted not to go Sears (I didn't need a Craftsman eye test!), JCP (well they've been having a lot of changes, so.....) or Target. So I actually went to Lenscrafters.

The doc was superb.  So was the intake nurse.  ....the front staff left a lot to be desired, but........they weren't treating me, just greeting me.

Let me tell you - technology is great.  I always found that most optho places don't want to invest in the most up-to-date equipment. Yeah, they have gadgets, but I never saw it benefiting me!  But Lenscrafters was the shit!  They had all the updated stuff.

Yeah, they did the glaucoma test.  Then they did just a machine that had me look at a picture in the updated GAF viewfinder gizmo (more on that later).  And I was happy to splurge an extra $20 not covered by my insurance to do the retinal photography of my eyeballs.

The retinal thing saved me from having to have my eyes dilated. No stinging yellow-coloured drops.  No being out of focus or sensitive to light for hours afterwards.  And the photo shows where you are on Diabetic Retinopathy (I'm clear!), Macular Degeneration (no issues!), CMV (doing just fine, thanks), and I'm golden on my optic nerves, blood flow and have no eye cancer.   Thankyouverymuch! 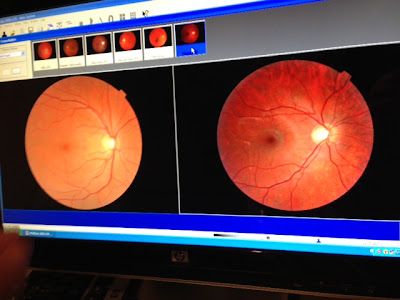 On the left is my right eye.  The standard eye is on the right. The colour difference isn't important. Comparing the blood flow, the red dot, the white dot and some other things. Mine was comparable. I have healthy eyes - I mean, except for having really shitty uncorrected eyesight. 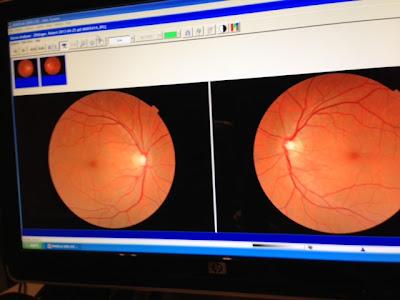 These are both my right and left eyes.  They look like misaligned / cross-eyed boobies.

So then it was actually time for the eye exam, which was cut down in time considerably to that machine I mentioned earlier.  It looked at my eyes and read them, so that 'which is better - 2 or 3; 3 or 4' was a minimal part of the test.  The doc was able to go to the heart of it.  The scan - or whatever you call it - did most of the work.  BONUS.

Then it just got down to bwass-tacks (as Lily VonShtupp would say):  how much has my prescription changed?  Not that much.  Almost nothing in my near-sightedness.  A little worse in my far-sightedness.  I knew that was coming, as it's easier for me to take off my glasses to read the paper than it is with them on.

So we're trying something new with the contacts - which is what I really needed.  One at full vision and the other for reading.  It beats (in theory) single vision lenses then having to wear readers from Walgreens.

I only wore the contacts for hours and my brain-to-eye coordination wasn't working yet. It will take a bit to adjust, and I have to have the doc adjust even more.   Why? you ask?

I don't have the ability to close my left eye on it's own - I know, right?  Winking with my right is my only option.  So when I was home, I tried to work on the computer and couldn't.  The lens needed to see near resides in my right eye.  I can't close my left to focus on near.

So I'm gonna axe the doc to switch the lenses.  Oh, I know you're thinking I can just put them in the other eye, but the script will be different for both eyes, so no, I can't.

I'll get it to work out.

Oddly enough, right now I only wear my contacts when I work out or ride.  I don't anticipate that changing much, but maybe if they fit better (they have silicone in them and allegedly get more oxygen than my old ones), perhaps I can wear them longer.  We'll see.


Oh and just for fun - isn't this everyone's encounter at the opthamologist?


Song by: Felicia Day & Neil Patrick Harris
Posted by Blobby at 12:43 AM

I am glad you got the eyes checked.
It reminds me my check up is overdue.

I got out of getting glasses for years having memorized the 20/20 and 20/10 lines of the standard eye chart.