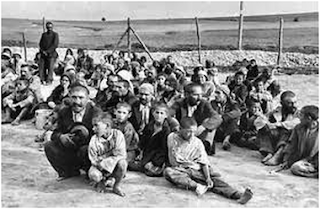 Here is a story I thought would have gotten some legs nationwide, but I haven't seen that - and now with Boston in the headlines, this will only be tackled at a local level.

So a teacher up in Albany is under fire for a persuasive writing assignment she gave 75 students.

While perhaps (and I am reserving judgement on her approach) the wording / set-up of the assignment might have not been clear or misinterpreted, I'll go out on the unpopular limb and, to a degree, back up the actual classroom task.

The assignment? The students were instructed to imagine that their teacher was a Nazi and to construct an argument that Jews were “the source of our problems” using historical propaganda and, of course, a traditional high school essay structure.

On the surface, this sounds horribly insensitive. It seemingly speaks to hate (from the teacher) and reeks of anti-Semites.

Here is why I think (and hope) it is not.

Granted, this is not a history class, but an English one.  But I was talking to a friend about this and wondered what they actually teach in high school history these days, especially about World War II.  Yes, you spew facts about the war - dates, battles, bombs, but do they really teach reasons?   I'm not talking to the history buffs of the world, but the general population.

I would venture to say that many know way more about the Japanese theater  of WWII - Pearl Harbor and two A-bombs.  But I'd venture to guess they don't know as much regarding the European stage.

Quick - other than the assassination of the Archduke Ferdinand, what do you know about WWI ?    Yeah, I thought so. I'm not chastising, because I know little else myself.

So back to the assignment.  At first I was like, she should be fire.  My second thought, a few days later was, she will be fired, but should she?

Granted, she could be an anti-Semite and just spewing hate, or g-d forbid, is she trying to get the kids to think!

Go back and look at the assignment.

An entire country (Germany) can't all be hateful and evil. Yet, they watched trains full of people go to camps yet come back empty.  They saw folks pulled off the street, never to be seen again. For years.  Few said, or did, a thing.

An army was built up - and convinced that genocide was the right thing to do.

But HOW?  How did it get to that point??  And I think that was the teacher's point.

Even if they teach about Hitler in school, they are not teaching the hate behind the man and how a man or society gets there. Or better yet, how does a man get an entire society there?

I can certainly see the problem with the assignment in terms of mom and dad seeing this and going "whaaaaaat?"  I can see that kids are so frickin' desensitized and easily manipulated these days that it is two leaps from writing their five paragraphs for class before they are joining a white supremacist group.

Yes, this could task could be construed as hate. And it is.  Yes, there were probably better (or different) examples to use for the assignment. But as an overall learning tool, is brushing the potential means under the rug for a 1932-1946 Germany any less short-sighted?

If nothing else, with this experience, this teacher just gave 75 students their essay for their college applications.

people are so sensitive these day, and we take everything so seriously. I can see why there was such as fuss.

I thought the same thing.

I guess the problem in teaching history these days is that teachers lack personal information regarding the matter. What they teach is just the details of what happened but not quite enough. This teacher was just trying to get more personal with some topic on history.

Speaking as a former English teacher, I can see what her intent was. But she could and should have chosen a different group characteristic to make her point, one that was not so emotionally charged and with such great potential for doing harm. Another teacher is known for her classroom experiment with prejudice by associating "better" and "worse" with eye color. Very successful outcome without anyone mistaking the reasoning for truth.

If you really wanna know who is ruling you look for the group that you are not allowed to criticize. Would it have been more appropriate if the assignment was to make an argument justifying the Israelis extinguishing the Palestinians?

I think my essay would've only been like one sentence long...