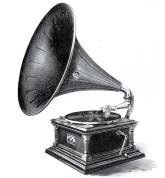 Today you get a two-fer.

I do love the National, and they have a new disk coming out at the end of May (be forewarned, it will be my Record of the Month selection in June), three years after High Violet was released.

As a teaser for Trouble Will Find Me, the group put out its first song / video last Tuesday.  If you pre-order the disk via iTunes (and maybe other venues), you get the single, "Demons" right away.

I want to like "Demons" more and maybe it will grow on me. Since I did pre-order, I got the song and have been cycling through it.

I like Matt Berninger's baritone and the bands playing - stylistically there isn't a lot different in their previous productions or playing ability, but the first two minutes kind of drag and are more spoken than sung.

At the two minute mark, or so, it gets much better as it kind of finally finds its groove. But that first two minutes truly challenges me.  I find it an odd initial release, but I'll give them the benefit of the doubt as High Violet was possibly the best release of 2010.


I like "Don't Swallow the Cap" a little more.  Where it is more of a song, than spoken word, the elements of the music are slightly different I've experienced on most National songs.  I'd say it's "perky", and it is, but it isn't.  But that can be said of some of their music.

Usually I don't get to "premiere" new music here, but here it is.