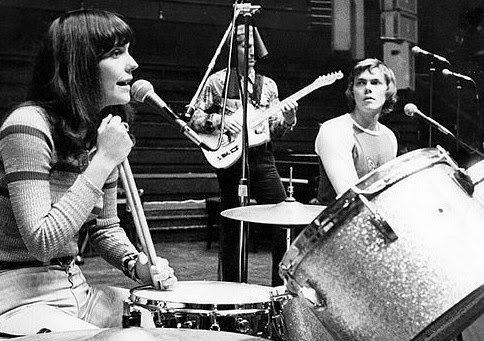 I know I normally do "funny" (oh yes, that is in quotes!) sites when doing my Site of the Month. Now and then, I'll stray to something artsy or cool.

This one is none of the above - possibly.

For those who might not know, popular music is recorded in a bunch of different ways - but even back in the '70s the process was similar as it is today - minus ProTools and AutoTune.

Sometimes bands would record live with all or most of the players in the studio at once. But each instrument or voice could be isolated and changed out in overdubs.

Or there was never having the same person in the studio at the same time and the song(s) just get built track by track.

Someone over at Dangerous Minds went to the trouble to isolate Karen Carpenter's vocal tracks on a number of tracks that the Carpenters recorded.

I categorize this under the 'cool' moniker. Artsy is in the eye of the beholder, though it seems cool to now love Karen Carpenter's vocals.

Me? You've read before (not that you've retained) that my first full album purchase was the Carpenters self-titled album. I was in first grade! I eventually would go on to purchase many more disks by them, but eventually grew out of their style.

I also thought it was cool as fuck that she was a drummer. Girls as drummers. That's just crazy talk! Girls can't be drummers!!!

But for some of the cheesiness that went with some of their songs (yes, not all were classics), the most important instrument was Karen's voice.

While it doesn't (nor ever has) work on "Ticket to Ride", the rest of the selections are good. Some better than others and some actually could work 'as-is' with just the bass and drum tracks. (if you listen closely some have a very very muted piano track.)

I am especially fond of "Superstar".

It's hard, in your head, not to fill-in all the additional tracks that go along with each song. But for a moment, it's nice just to focus on the voice.

Honestly, in today's music - and I know I sound like Grandpa Simpson - but the vocals and the voice are secondary to the whole song experience. Having actual talent is tertiary.

It's nice to know that, at least for a while, having actual chops meant something.
Posted by Blobby at 12:02 AM

These days you don't have to be able to sing to be a singer, you need to perform. Music has become less audio and more visual.

This is wonderful. I've always loved Karen's voice but the arrangements have always kept me away from her work.

Thank you so much for this. I grew up listening to that voice and love it still. I thought I was the only one, if you can imagine that. I was gay and I liked Karen Carpenter. My life's big secrets.

i love her rich lower register. I heard Superstar on the radio the other day in the car and was reminded of that. I think my favorite of her recordings is her version of Don't Cry For Me Argentina.