There's a Story in Your Voice 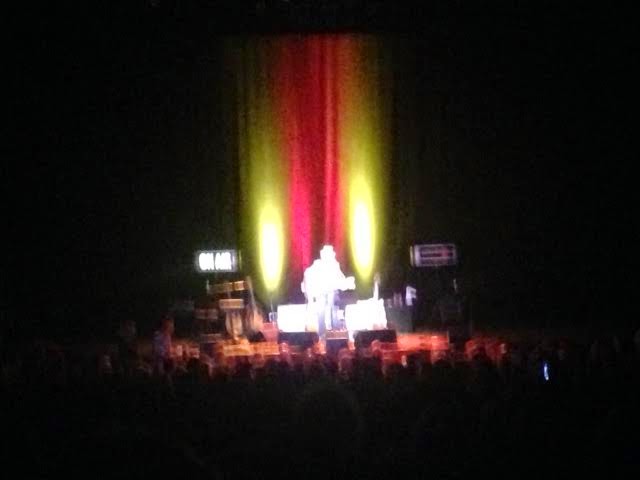 I like to think of my title image as 'arty', not 'poorly shot'. But listen folks, there is only so much one can do with an iPhone from 200 feet back.

What you see is actually Elvis Costello.

Through the grace and generosity of my cousin and his wife, my nephew and I saw Mr. MacManus live on Monday night.

It was all very weird in a way. David and Matt had never met. I was listening to Costello when I was younger than Matt is now. Matt's parents went on one of their first dates to an Elvis Costello concert and the Cleveland Agora, a show in which Costello himself referenced later in the evening.  I guess it is the circle of life thing.

I was not sure what the night would hold. Costello, who has roughly 35 albums - all varying in styles - so, in theory, had a minimum of 350 songs from which to choose, and it was to be just him and a guitar. I wasn't sure how it would all play out.  Pun not intended. Or was it?

Overall, the two and one-half hour show was cohesive. He did some of his newer songs (with the Roots), but dove back in time to do quite a few from his early works. And when I say "early works", I would go up until 1989.

I would say, I would have liked 'deep tracks', but many of them were. I can't say "Shipbuilding", "My Three Sons" or "the Slow Drag of Josephine" ever burned up the chart. But I was always a fan of "the Element Within Her", "Just a Memory", "Stranger in the House" "Sleep of the Just", "Monkey to Man", "Our Little Angel" and stuff like that. But since he only played like 30 songs (which is a fuck of a lot, I might add), he could not even cover one-tenth of what he has put to tape.

He did get around to a few of the biggies, "Alison", "Everyday I Write the Book", "Lipstick Vogue" and of course, "Watching the Detectives".  The latter was done with a bit of distortion that it was almost as if Neil Young and Crazy Horse circa 1980 were backing him up. He also incorporated one or two covers (including the Beatles, "You've Got to Hide Your Love Away") into two of his other songs. It was nicely done.

I'm sure everyone did get everything they wanted. Who ever does? Yet it did get me thinking about how big of a Costello fan I am, or at least used to be.

Actually, the mix at the beginning of the show was....I guess loud. It wasn't really muddied, but I had trouble hearing his words. You can say I'm an old man, but I think I was the mean age. Poor Matt, at 21, was possibly the youngest person there. But Matt is just getting into Elvis' first few disks, so it was good.

The problem was sonic and not my hearing. They did seem to clear up the sound problem early on. And while Costello wouldn't ever be categorized at the best vocalist, his aim was true (see what I did there?). He sounds pretty much like what he did back in '77. And that is kind of a feat in its own right.

The man was the king of "just one more?".  I stopped counting the encores and each one had multiple songs. At that point just give up the ghost and extend the show to include some of those.

I think he was five or six songs in before he spoke and I was wondering if he ever would. Some performers are not adept to actually speaking to their audiences. But he did and he was very engaging.

It was my first time seeing Mr. Costello (do you think in Middle Earth his name is "Elvish?) and it was so worth it.

I owe David and his wife big time. A great time was had by all.

Song by: Elvis Costello
Posted by Blobby at 12:01 AM

my spouse is a big fan of his wife's music (diana krall).

and yes, I saw what you did there.

HAH, Had such a great time. Glad you did as well. Bigger fan of his than I was before the show.

HAH, Had such a great time. Glad you did as well. Bigger fan of his than I was before the show.