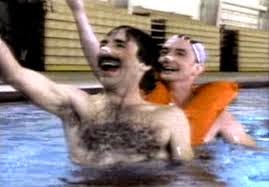 First off, you don't have to be gay to participate. I get that - they're all-inclusive. Everyone is welcome. Unlike the Sochi games.

Secondly, you don't even have to be an athlete to participate in the games. You just have to have the $$$ to pay the registration fee.

Apparently, skill and athletic prowess are secondary or tertiary requirements.

I haven't truly played tennis since I was in 8th grade, yet I can waste the time and effort of a potentially nationally seeded player by making him hit balls with / to me.  (hehehehe....I said 'hit balls'.)  Sure it would be humiliating for me (and probably for him too), but there's no rule against it.

And 'games' is questionable.  Darts is now a 'game'.  It doesn't say if you can be drinking at the time, because, who plays darts without beer being involved?  And wings.

I'm kind of surprised there isn't a Decorating or Coordinating Outfits event - but then there is that whole letting the straights participate. They'd be at a disadvantage.

Allegedly, everyone who participates gets a medal of some sort. Just like when you played 2nd grade t-ball. Yet everyone is in a quandary how society feels so entitled.

Now that just makes the Gay Games just sounds like a money making endeavour. That, and the largest Grindr outlet since the isle of Manhattan, and little else.

But while doing yoga yesterday, the organizers mentioned something about their summer package deal (hehehe...I said 'package') that if you do x amount of classes, you get x amount off your registration fee at the Games. This isn't even a gay yoga studio, though they are housed in a former leather bar site.

So I have had a scathingly brilliant idea:  form a Synchronized Swim Team.

I mean, why fucking not?

I had no ideals to participate in the Games, but honestly - why not?  Clearly you don't have to be good, and if I'm going to crash and burn at something, I should do it with something I have never done. Let's face it, Powerlifting is out.

....and let's be honest, this would make great blog fodder. And good for a fucking laugh.

I figure it can be done somewhere between a Caddyshack moment (including the Baby Ruth part) and the SNL skit, complete with nose plugs and water wings.

Whereas, according to the rules, I could do this solo, where is the fun in that? I need - nay, want - a team. One who is willing to just have fun and suffer slight humiliation for anywhere up to four minutes and fifteen seconds. Of course, to do this I need a few things - and in this specific order:


Who cares what you do in the water, if you have the right outfit and music?

One doesn't need to actually swim, but must be somewhat buoyant and the ability to hold their breath for maybe up to 30 seconds.....depending on what routine.

Oh, and one will need $70 for registration. But depending on who agrees, I might front that cost for the team.

Won't you consider participating with me?  C'mon, it'll be fun.

you forgot flower arranging as an event! ;-)

I can't swim, so my participation is out. but I think you have a scathingly brilliant idea there; go for it! blog fodder it is!

every year in Key West we would try to organize a swimming show to Patsy Cline. We all knew the tunes but our swimming was not so good.

uhh....i don't know if you'd like me on your team. See, i was declared a "non-swimmer" at Boy Scout camp when i was 13 (oh how those last 20 years have flown by). They didn't allow glass in the pool area, and since i was a blind teenager with thick eyeglasses, i had to enter the pool compound ala Mr. Magoo. Long story short: me bring rescued from the middle of the pool with one of those long, silver hooked poles. Hi humiliation! So i'll certainly cheer you on from the bleachers, but i'll stay out of the water. Thanks for asking

Wait, there's a gay games? I guess the local NBC affiliate here in Arkansas must not pick that up.