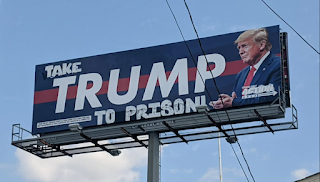 I am specifically talking about BLOTUS' family real estate business has been found guilty on all 17 charges of tax fraud.

There is no jail time for this. At most there is only a $1.6 million settlement.  His CFO didn't even get a hand slap, and his "key" testimony didn't implicate BLOTUS.  ......and he still has his CFO job there, so.....no real repercussions per se.

Still, it's pretty much the first thing that BLOTUS has been found guilty of, even if indirectly. It's got his fucking name all over it.

Political witch hunt will be the talking points from his re-election team and the saps with no brains to know he's noting more than a house of cards. There literally is no there there.

Let the chipping away continue. I mean, we knew it anyway - including his loyals. No tax returns have been shown, and that is because they / we / them / I / us knew they'd show inaccuracies, fraud, lack of payment, etc. Yet not showing them seemed to be ok to a lot of people. Deep down they knew the score - the problem is:  they just don't care.  Unless it was a democrat doing the exact same thing.

After years of so-called downfall and 'this does it' events I doubt anything will happen.